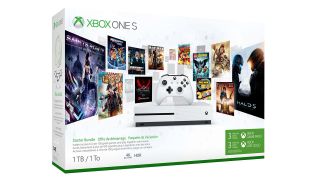 Sit down, because I’m about to drop one hell of a deal on you: instead of being almost $300, this Xbox One S 1TB starter bundle has $70 off. It comes with three months of Xbox Game Pass, which gets you access to over 100 games for absolutely free, and three months of Xbox Live Gold. Plus the console itself has 1TB of storage, so you’re basically being positively spoiled. You're essentially getting 23% off the normal price, which is a damn good deal.

Normally this bundle would be $300, so it’s well worth snapping up the 23% saving before it disappears. Among the hundred games you can play for absolutely zero bucks on Game Pass are all the Gears of War games including Gears of War 4, the Bioshock trilogy, Fable 3, Terraria, and Metro: Last Light Redux. Oh yeah, and Sea of Thieves, which’ll have you sailing the oceans in between playing the accordion and trying to avoid getting nommed on by sharks. Xbox Live Gold gets you exclusive discounts on games, so just prepare your wallet for the inevitable temptation...

As more Amazon Prime day 2018 game deals continue to appear, stay in the know with our updated guide on the best offers yet.