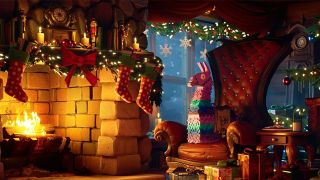 Following a slight delay with starting, Epic are now getting into the swing of Christmas by giving us a set of new Fortnite Winterfest challenges to take on throughout the festive season. After initially launching on December 18, a new challenge will subsequently be released each day until the full set of 16 are revealed, with a couple of buffer days added to the end to wrap things up in Fortnite before the Winterfest event reaches its conclusion on January 6, 2020. They'll certainly provide a holiday boost and help fill some of the time until Fortnite Chapter 2 Season 2 arrives, anyway!

The Fortnite Winterfest challenges will be released in daily stages during the course of the event, but thanks to early leaks we know what all but two of the challenges and their reward items will be. They are as follows:

If you're looking for further details on how to complete each of these daily Fortnite Winterfest challenges, then we've got you covered in this section.

For each challenge you'll first need to visit The Winterfest Cabin, which is a new addition to the Fortnite menu for this event, and can be accessed by selecting the icy icon from the tabs at the top of the screen. Once inside the Winterfest Cabin you can explore the room, so move the cursor to the Holiday Stocking hanging on the fireplace and search it to reveal your next challenge. If you haven't already opened your gift for the day, you may need to do that first before the stocking become available to interact with.

Deal damage to opponents with a Snowball Launcher (200)

The Snowball Launcher weapon has been added into the game for the Winterfest event, which can be found in chests or at floor spawns as with other weapons. Once you've found one, launch the explosive snowballs at opponents until you've dealt 200 damage to them.

There are plenty of Fortnite campfires dotted around the island, and once you've found one and lit it you'll need to stoke the campfire by adding 30 Wood or a lump of coal to beat this one.

Eliminations with an Unvaulted Weapon (5)

During the Winterfest event there will be a new weapon unvaulted each day, which you'll need to grab and take out five opponents with in total – as always, Team Rumble will be the easiest mode to secure eliminations in, and naturally some of the unvaulted weapons will be easier to get them with than others. According to Guille-GAG, this is the full list of weapons that will be unvaulted:

Hide inside a Sneaky Snowman in different matches (2)

You can either collect Sneaky Snowmen as an item from chests, or find them already situated in the world. Either way, once you've thrown or located it you just need to approach and interact to hide inside. If you're struggling to find any then there should be some Sneaky Snowmen around the Shiver Inn.

Warm yourself by the fireplace in the Winterfest Cabin (1)

Again, access the Winterfest Cabin from the menu, then highlight the fireplace and interact with it to warm yourself.

There are a total of 13 Named Locations around the island, and but only six of them feature large Fortnite Holiday trees somewhere within the area. Perform an emote near it to tick it off your list, and remember which once you've visited as you'll have to do this at five different Named Locations.

You'll probably do this in most matches as a force of habit by now, so drop from the Battle Bus into an area with a number of buildings and you should be able to find a chest pretty quickly. The further you can glide from the path of the bus, the more likely you are to find unopened chests, but remember that 60 second limit applies so don't dawdle.

Presents are festive loot items which can be found as drops around the island. Pick one up and launch it to spawn a large present block, with more loot contained inside it which you can collect.

Frozen Loot is an item encased in a large block of ice, which can be found in the snowy areas of the map to the southeast, including the area around the Shiver Inn. You'll need to deal 3,500 damage to break through the frozen exterior, though at least you only have to do it once for this challenge.

Deal damage to an opponent with a Lump of Coal (1)

At the moment it looks like the Lump of Coal item can only be found inside activated Presents, which makes them pretty rare and then you have to hit an opponent with one. Team Rumble is the best place to attempt this, once you've tracked down some coal.

Destroy a Sneaky Snowman with a Lightsaber or Pickaxe (1)

Simply find a Sneaky Snowman in one of the snowy areas, then whack it with your lightsaber or pickaxe to destroy it.

The Fortnite Workshop, Crackshot's Cabin, and Mr Polar's Artisanal Ice locations are three new Fortnite landmarks added as part of the Winterfest event, and you'll need to visit all three of them for this challenge so check our separate guide for where to go and tick them off.

Fortnite Ice Boxes are found by certain buildings and look like the ice vending units you'd typically find at a motel. You can find examples of them in Sweaty Sands, Weeping Woods, and at the Shiver Inn, so interact with any of them to spit out some loot and work through this challenge.

Sweaty Sands, Craggy Cliffs, and Dirty Docks are all Named Locations on the coast of the island, so their associated beaches aren't difficult to locate. Spot the frozen firework on any of them then interact to light it and you're done.

The Fortnite Workshop, Shiver Inn, and Ice Throne locations are three more new landmarks, and although we know the Shiver Inn is found on a snowy ridge in map grid G7, the other two have not been clearly identified yet. All you need to do is visit one of them and open a couple of ammo boxes, so get over to Shiver Inn and wrap this up.