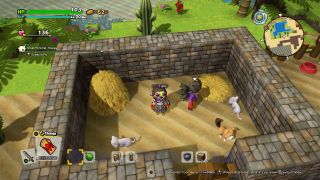 The acclaimed Dragon Quest Builders 2 is making its way to PC December 10, Square Enix has announced. The PC port comes with all currently available DLC featured in the PS4's season pass, which means you'll have access to new recipes, hairstyles, clothing, and environments. Pre-orders are open over on Steam, and pre-ordering or buying Dragon Quest Builders 2 before January 6 gets you a bundle of additional goodies.

The early adopter bonuses include:

The included DLC packs are the Hotto Stuff Pack, the Aquarium Pack, and the Modernist Pack. Combined, the updates add over 100 new recipes, customization options, and an entire island where you can catch and breed 40 types of fish and build an aquarium.

Dragon Quest Builders 2 made its debut in Japan on Switch and PS4 almost a year ago, with a worldwide release following in July of 2019. Mostly lovely reviews note its expansive explorable environments and well-executed blend of RPG and building mechanics.

Our own Rachel Weber wrote in her review that "Dragon Quest Builders 2 is back to make its mix of Minecraft style building, Harvest Moon farming and Zelda-ish exploration your whole life. The first game proved just how satisfying the mix of creation and carnage could be, and Dragon Quest Builders 2 improves on the original formula like it's slinging a diamond necklace on a unicorn."

If you don't care what platform you play Dragon Quest Builders 2 on, keep an eye on Black Friday game deals for a price cut on PS4 and/or Switch.