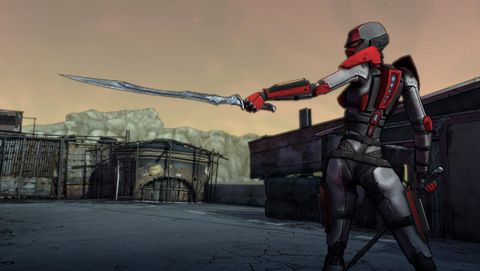 Borderlands’ weaponry revels in ridiculous combinations. You can feel the game code straining to keep things in check, but proudly stepping back when something like the RPG21/V2 Spread Rocker Launcher is spat out. When we heard on the review grapevine that someone had discovered a shotgun that fired rockets, we experienced such a severe case of Gun Envy that we had to take a cold shower.

Borderlands is a shooting gallery. Your enemies are brainless meatbags to test your guns out on, spamming bullets and rockets, occasionally running for cover. Yet variations on a theme will see midgets and burning psychopaths coming for you, and hideous moth-like creatures dive-bombing out of the sky. And the midgets will occasionally be bowled over by their own shotgun blasts, screaming in high voices as they land arse-first in the dirt.

Gearbox knows enough to make a headshot a headshot, and there’s not a trace of sluggishness when the game calculates body hits, and yet they’re still explicit about the underlying RPG. Numbers hemorrhage out of bodies like blood (as does blood), reporting the damage you’re doing. We never knew numbers could be so beautiful, but seeing a new weapon destroy someone in an explosion of Sudoku and guts makes all the crate opening and body-rooting worth it.

It was when we started upgrading our skills that RPG and FPS finally meshed into something better than the sum of their parts. You get one upgrade point with every level-up you experience. Roland (the soldier) gets his turret at level 5 – an automatic gun. It tracks and shoots enemies, and provides shelter behind a low shield.

It’s here you begin defining your character: you can upgrade the turret, give it a bigger punch with missiles, speed up the deployment cooldown. Roland can have bullets that heal teammates, extra powerful shotgun blasts, and more. We started thinking about his role in the context of this harsh, alien world, where it’s a continual fight for survival. Almost instinctively we began building up a support character, someone who anyone joining our game could rely on for extra health buffs and ammo.

When the quests allow you to move beyond Firestone, leveling acquires more depth. You start to find character class mods, either as pick-ups or in the vending machines, defining further skill specialisations. We picked up a Heavy Gunner Class mod that augmented our weapon clip size and bullet impacts, and a Support Gunner mod that increased team XP-gathering by 22%, enabling us to swap either when needed. You level-up quickly, and that single upgrade point got under our skin. How could we spend it wisely? Is it more useful to have a turret that helps the team but can’t be deployed at will, or the ability to regenerate grenades?