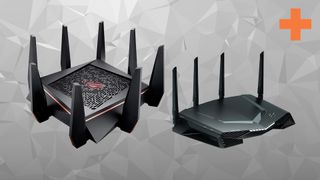 Here are the best gaming routers 2020 can deliver to your setup right now. Now that Wi-Fi 6 is here, promising network speeds of up to 6Gbps, it's only a matter of time before this is matched by our at-home internet bandwidth. But without the proper router – the best gaming router – any effort to thwart your buffering woes are rendered null. Though you could just stick with whatever kit your ISP offers, those rental fees can pack a financial punch long-term. To save money and annihilate lag, the obvious and most effective solution is to upgrade to the best gaming router.

But what makes the best gaming router 2019 can afford? Firstly, like any new hardware, you'll want to take a look at the specs. While there used to be difficult-to-parse technical terms like 802.11ac, the Wi-Fi Alliance is trying to attract new clientele using a more familiar, numerical vernacular. Wi-Fi 6, in short, is the same as 802.11ax, which itself is the sequel to 802.11ac. All you need to know is that it's faster and that it consumes less battery when connected to one of the best gaming laptops. Meanwhile, Wi-Fi 5 is now the 802.11ac equivalent, and so on.

5G is another technology you'll start to hear more about soon enough. However, the functions of Wi-Fi 6 and 5G differ greatly. Whereas Wi-Fi 6 refers to the new home internet standard, 5G will start to appear on mobile devices later this year. To experience the benefits of Wi-Fi 6, you'll have to buy a new router, which we'll start reviewing here soon. These include the Netgear Nighthawk AX8 and the Asus RT-AX88U. In the meantime, all of our top picks come close, without breaking the bank. And unless your network exceeds 1Gbps (that's 125 megaBYTES per second), you won't notice the difference anyway.

The best gaming router you can buy

For those seeking the Cadillac of gaming routers who have no qualms about dropping some serious cash (and making serious space), the Asus ROG Rapture GT-AC5300 is a pricey, yet powerful option that looks absolutely ridiculous. With 8 antennas, a quad-core processor, USB 3.0 ports, and 8 Gigabit Ethernet ports for wired connectivity, it's the luxury choice for the discerning gamer. This router will offer some unbelievable lag-free speeds, with an extensive selection of gamer-centric features, such as network ping tracking, a meaty interface, and excellent hardware that offers a veritable treasure trove of customization options. At nearly $400, it's a splurge, but it's also a massive beast of a router that delivers on all its promises.

The best gaming router for ease of use and control

The TP Link Archer c5400X is a gaming version of the recent c5400, and it's a damn good gaming router. While it doesn't quite match the ASUS Rapture, because it doesn't have any in-built tech to actually enhance your gaming connection, the TP Link wins out on ease of use. You can control everything via a simple menu, and it's packed with features to help you tweak your set-up, including those all-important QoS options. In terms of wireless performance, the C5400X manages very impressive speeds over the 5GHz range - some of the best available today - but is merely above average when it comes to 2.4GHz. That's not necessarily a bad thing, but if you operate most of your devices further away from the router, you should consider one that performs better at 2.4GHz, especially considering the cost of this one. If you're serious about gaming, though, you should be fine (and delighted) with the 5GHz speeds you get. Overall, this is a great piece of kit, and only misses out on the top spot by a whisker.

A sophisticated pick for lower budgets

Let's face it: Most users won't be in need of the Rolls-Royce of gaming routers. But many will be in the market for the next best thing. That is, by far, the Netgear Nighthawk Pro Gaming XR500 router. It's sleek, with an understated appearance that requires much less space than the aforementioned ASUS ROG Rapture GT-AC5300, but it still packs most of the punch. One of its most alluring features is its Netduma OS software, which allows for a long list of settings to optimize that comes perfectly tuned out of the box, with options to allow you to connect to the quickest and closest servers, and Dynamic Frequency Selection to help you cut down on any noise or potential interruptions. This pick is excellent in its own right, and certainly capable of keeping you afloat in any game.

Lightning-fast wireless in a deluxe package

Sometimes, you need the best speeds money can buy. If that's what you're most concerned with, then Asus's premiere RT-AC88U router can absolutely deliver. With four antennas and a dual-core 1.4GHz processor, it can hang with the big boys in terms of performance, but where it truly shines is its lightning-fast wireless speeds, the highest out of any of the other routers on this list. If you choose, you can purchase a NitroQAM adapter to push it even further to its limits. Otherwise, this router with four antennas, a wide selection of management features, and advanced settings that allow you to painlessly install just about any form of custom firmware imaginable is an absolutely fantastic choice. It's hardly the best option for anyone on a budget, but its utilitarian design and nature should rein in buyers looking for less flash and more performance.

'Killer' performance at a great price

Linksys is a familiar name in the router ecosystem, but don't let its pedestrian reputation fool you – this is a formidable contender in the realm of gaming routers. This particular model's Killer Prioritization Engine (for use with PCs with Killer networking cards) is a winner for sure, as it helps prioritize your own network traffic to and from the internet. Beyond that, this dual-band router is a small package with four gigabit LAN ports and four detachable antennas. The menu interface leaves a little to be desired, but that's hardly an issue when it's rocking a powerful 1.8Ghz processor, beam forming, and MU-MIMO. It's also one of the more affordable routers on this list, which makes it perfect for the hardcore gamer on a budget.

Still subscribed to the notion that gaming routers have to cost you an arm and a leg? You'll change your mind quickly when it comes to D-Link's budget DIR-879 EXO, which looks and feels like one of its premiere brethren. It certainly plays the part the best it can for its extremely low price tag, offering serviceable performance and fantastic 5GHz range. While there are no USB ports and you won't get the most formidable speeds out of this particular model, you've got to hand it to D-Link: this router is more than capable of putting you on the map if you're thinking of testing the online gaming and streaming waters. It's a great way to dip your toes into the water without breaking the bank, and if you're no power user, could even potentially work as a reliable router for months to come.

The best gaming router for the future, today

If the Netgear Nighthawk Pro Gaming XR500 is the Rolls-Royce Ghost of gaming routers, the XR700 is the Phantom. Expensive as it might be, it's built for a sort of timeless luxury you can't put a price on. Seeing as it supports the blisteringly fast 4,600Mbps 802.11ad networking standard, buying the Netgear Nighthawk Pro Gaming XR700 means future-proofing your home connectivity infrastructure for years to come, especially since only a handful of laptops are compatible. That said, don't let a lack of interoperability get in the way, as the XR700 is fully backward compatible with the present-day 802.11ac spec as well, delivering high speeds over 5GHz and even 2.4GHz bands at up to 1,733Mbps and 800Mbps, respectively. All that, combined with its fantastic QoS gaming prioritization technology and its equally robust DumaOS software, the Nighthawk XR700 is yet another win for Netgear.