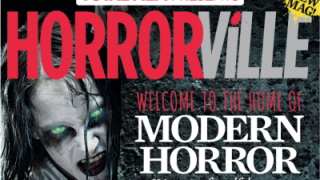 Calling all horror fans! The first issue of our new quarterly magazine, Horrorville, is on sale now. It's 116 pages dedicated to all things horror.

In the first issue we delve into the likes of Blair Witch – director Adam Wingard’s terrifying new sequel to the found footage classic; talk to author MR Carey about turning The Girl With All The Gifts from a bestselling novel into a thrilling new movie (and there’s an early review of the most exciting zombie flick in years) and find out more about new films like The Greasy Strangler, Cell, and Abattoir.

We also have the inside word on the new Exorcist TV show, a run-down of 50 must-see horror classics, plus interviews with The Woman In Black’s author, Susan Hill, and lit horror supremo Adam Nevill. Cult director Peter Strickland tells all about the films that have influenced him and we catch up with Baskin's Can Evrenol.

Plus with news, reviews, and our Marathon Man battling through every single Nightmare On Elm Street film, it’s a frighteningly good read.

Horrorville issue one is on sale now and can be bought here.