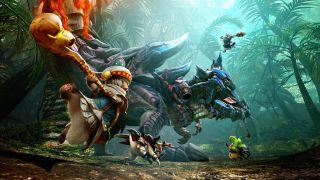 After Resident Evil: The Final Chapter concludes the sorta-related-to-the-games movie series early next year, writer/director Paul W.S. Anderson is going right back to Capcom for his next project: a Monster Hunter film adaptation that blends real life with the fantastic world of the games, according to an interview with Deadline Hollywood. Oh yes, it's going to be bizarre.

"The central characters are very relatable American characters," Anderson explained. "You take a person from the ordinary world who thinks they’re in a dead end job, they have no future, they feel like their life’s a failure, it’s going nowhere, like Keanu Reeves in The Matrix. It’s about a normal American who gets dragged into this parallel world, this Monster Hunter world. Then eventually the parallel world ends up coming to our world. So you have the creatures from the Monster Hunter world invading our world."

Anderson said that blending the two worlds together was an "opportunity to have a cinematic universe". So like Marvel but with giant swords and helpful catfolk instead of power armor and feuding gods?

"It’s definitely intended to be a franchise, because the movie starts in our world, and then it goes to the Monster Hunter world, and then the final act comes back to our world, and it’s basically this epic battle in and around LAX," Anderson said. "Then at the end we’re suddenly confronted with the fact that the mythological creatures of our world have come back to wreak vengeance. So we definitely have the second film where that would be planned out."

Anderson has been talking about adapting Monster Hunter since way back in 2012. He didn't provide a timeline for how far out the first Monster Hunter film may be, but he did say that Capcom has already signed off on the rights. As far as "reasons for dragons to suddenly appear and start tearing up modern day landmarks" go, it already has Reign of Fire beat at least.