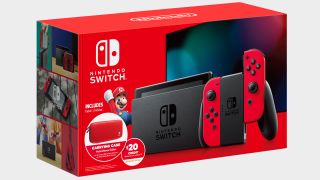 Just because Black Friday and Cyber Monday are officially over doesn't mean the Cyber Monday game deals automatically stop at the stroke of midnight. Far from it, certain online retailers will continue to offer great prices on a number of consoles, games, and subscription services all the way up to Christmas, such as this amazing Nintendo Switch Cyber Monday deal from Walmart in the US.

For just $299, you can nab yourself this fancy Mario themed Nintendo Switch with red Joy-Cons, an officially licensed carrying case for the console itself, and $20 in Nintendo eShop credit - yours to spend on whatever game you want from the online store. Heck, you could even enlist in a Nintendo Online subscription.

This bundle would normally go for upwards of $425 at least, making this saving quite the steal for the post-Cyber Monday season, especially given how it all comes packaged within the same Nintendo bundle, rather than something that Walmart has thrown together itself.

It's likely that stock isn't unlimited for this bundle, so you'd be wise to make your purchase sooner rather than later if you're interested. Otherwise, there's still a number of great Switch deals, so click on the link for more information on the latest offers.

Check out what other deals are still available right now, including those still spilling over from the Black Friday and Cyber Monday extravaganza via a number of retailers online: