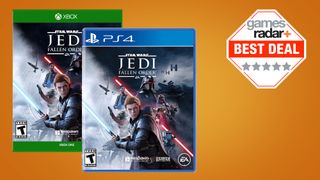 Star Wars Jedi: Fallen Order has bucked the trend of disappointing Star Wars games to bring us one of the franchise's best titles in years. Better yet, Walmart has just announced the best price we've ever seen for the game on both PS4 and Xbox One at just $39.99. That's a very tempting saving of $20.

Our Star Wars Jedi: Fallen Order review called it, "an endearing adventure that ranks as EA's best Star Wars effort yet." The last few Star Wars titles from EA have generally focused on the multiplayer experience, but Fallen Order is all about a solo (no, not the Han type) campaign mode. We're very much on board with this as at one point a few years back it seemed EA was forgetting about fans of story modes in favor of multiplayer and micro-transactions.

Because reviews have been highly positive and Star Wars is super hot right now thanks to The Mandalorian TV show having fans clamoring for a Disney Plus sign-up (and the imminent Star Wars: The Rise of Skywalker movie, no less), we certainly didn't expect to see a sizable discount on the game so soon after release.

Star Wars Jedi: Fallen Order | $39.99 at Walmart (save $20)
Not even Black Friday and Cyber Monday could come up with a deal this hot on one of our favorite games of the year. We don't see this price sticking around for long in all honesty and it will probably be back up to at least for $50 for a while in the new year.
View Deal

While you're waiting for delivery, you might want to check out our Star Wars Jedi: Fallen Order tips guide so you can hit the ground running once the game arrives. And you might need it considering there's a bit of a Dark Souls/Sekiro vibe going on with the game, meaning you can't just go wading in blindly, mashing buttons for success. Thankfully there are multiple difficulty options available, so you won't be left sobbing in a corner for long. Not that we do that when playing Dark Souls. Honest.

And if you enjoy the game, recent job listings suggest you might not have to wait long for a Star Wars Jedi: Fallen Order sequel either.

We've got you covered on a huge range of discounts happening right now. Be sure to check out our stories on the latest gaming deals so you don't miss out.