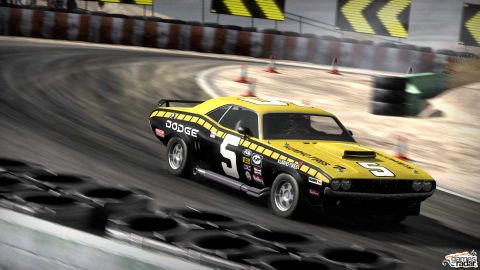 No doubt about it, drafting in British developers Slightly Mad Studios has revitalised the series and turned it into a serious contender. Of course, it helps that Need for Speed SHIFT has clearly used last year’s king of the road, Codemaster’s brilliant GRID, as its benchmark.

Gone are the police. So too are the illegal street racing undertones, obsessions with extensive visual modifications (although bodykits, vinyls and paintjobs can still be tweaked) as well as any lame attempt at a storyline or bit-part glamour models squawking mission objectives at you through product-placement mobile phones.

Instead, we’ve been treated to a pretty damn excellent driving simulator that ticks all the right boxes: a wealth of cars bred for motorsport rather than pimping through LA; visceral engine noises; punishing vehicle damage; and handling that really starts to come alive the less you rely on driver assists. We’d happily admit it’s far more realistic than GRID but without the staid and intimidating nature of Race Pro or straight-laced functionality of Forza Motorsport 2.

Any issues we had with the handling at preview stage have been ironed out and what remains gives masses of feedback without feeling unapproachably hardcore. We still have a couple of issues, though – placing manual gear shifts on the shoulder buttons is a terrible idea (no controls customisation options either). And the drift mode requires such precision it’s more an exercise in how gently you can feather the accelerator, rather than the fun, smoke-pluming lunacy of GRID.

Unlike GRID’s scattershot career mode (throwing you from a Demolition Derby to a Formula 3 single-seater and so forth), SHIFT offers much more predictable progression. Working your way up through four tiers of races, from a VW Golf or tired old 1970’s Skyline up to a Bugatti Veyron, McLaren F1 or Pagani Zonda is typically Need for Speed.

In fact, even with the new direction and serious motorsport intentions, it’s very clear that SHIFT is a Need for Speed product. Although, being co-developed by EA Black Box (who’ve worked on NFS games for the last decade), this shouldn’t come as a surprise. While EA has entrusted driving duties to Slightly Mad, Black Box have concentrated on placing their unmistakable stamp on SHIFT too.

Beyond the aforementioned modification sections and the glitzy presentation, this comes in the form of your driver profile. With the devil of Aggression and angel of Precision sat on either shoulder (the two key areas in which your driving skills are judged by), you’ll be rewarded according to how you behave behind the wheel. With skill badges covering every aspect of racing (Drafting, Overtaking, Drifting, Podium finishes, etc) and specific Invitational events unlocked depending on your style, they act as pleasingly constant pats on the back. Plus, they can be used as a good indicator of an online opponent’s skill. For the brief while before everyone has gold everything, that is…

The best thing is that, even after you strip away the bells and whistles of in-race objective star collecting, award badge hording, swooshy menu screens and expensively licensed soundtracks, you’ve still got a great-looking, fine-handling racer that can hold its head high against some extremely strong competition. SHIFT may not have snatched the yardstick from Turn 10, Polyphony Digital or Codemasters, the damage model might not be the best in the genre, and nor is it the absolute, final word in realistic driving. But it has reignited our affection for Need for Speed – and that alone is a real achievement.