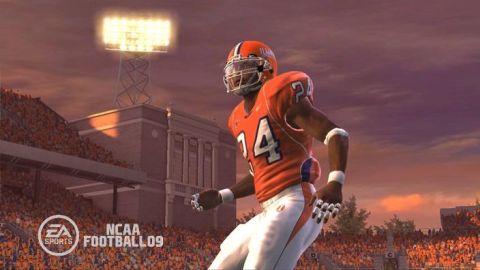 Consistently successful college football coaches win for a reason. Coming off championship seasons, they don%26rsquo;t mess too much with winning formulas. A few tweaks to the playbook here, some new paint on the weight room walls there, and voila! it%26rsquo;s time for another year demanding blood, sweat, and tears from skinny freshman, grizzled seniors, and everyone else in between.

So it is with NCAA Football 09, this season%26rsquo;s collegiate pigskin follow-up to last year%26rsquo;s masterpiece. EA has wisely eschewed tearing open the guts of the game engine in favor of adding even more polish to the overall experience, and it shows. Bucketfuls of new animations make their appearance (livening up the play-by-play action nicely) while smarter crowds and cheerleading squads goose the atmosphere quotient up a few notches. The on-field scrum is as smooth as ever, allowing you to concentrate on hitting your running lanes or finding that open tight end right before you%26rsquo;re planted violently on your back by a snarling linebacker.

The handful of new features do add some wrinkles to your playbook, notably the ability to somewhat atone for costly interceptions by identifying the defensive set right after you%26rsquo;ve turned the ball over. Get the call right and you keep some of your confidence; go the other direction and you%26rsquo;ll suffer a crisis in mojo that can really take its toll as the game goes on. Perhaps the biggest new addition this season is the long-awaited online dynasty, pitting you and a bunch of online buddies against each other for a bunch of virtual seasons, competing against each other not only on the field but also in recruiting wars. Seems like we%26rsquo;re not the only ones who worry that unsuccessful Ole Ball Coach wannabes will drop like flies when things get tough (or life gets in the way) - if your online buddies disappear, all your hard work can be converted into a regular single-player dynasty. A nice thought (and one we%26rsquo;re pretty sure will get used plenty of times).

The addictive Campus Legend mode returns intact, worth mentioning not because it%26rsquo;s new (or significantly modified), just because it%26rsquo;s so darned fun. Navigating high school playoffs, choosing a school, and working your way up the depth chart in brutal practices is an intense and demanding engagement that gets better each time we do it.

Even if NCAA Football 09 doesn%26rsquo;t exactly reinvent college football video games as we know them, it%26rsquo;s the best version yet to grace us this generation. While some hyper-casual fans may find it hard to justify dropping 60 bucks on it, those of us who circle two gridiron-based dates on our sports game calendar every year won%26rsquo;t be even slightly disappointed. NCAA Football 09 packs gobs of terrific collegiate pigskin action into a tidy package, guaranteed to satisfy your football jones for another season.