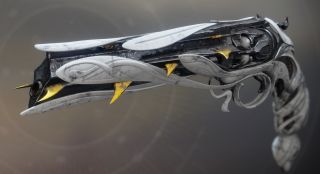 After years of obscure lore hinting at its existence, the Lumina Destiny 2 Exotic hand cannon was finally released in the Season of Opulence. With special rounds that heal and buff allies, Lumina is the first true support weapon in Destiny's history, and it's the perfect foil to the much more sinister Thorn. These two Exotics are total opposites but they're also inextricably connected, so it's only fitting that the Lumina Destiny 2 quest begins in the same place as Thorn's. We'll start our guide there, as the opening to the quest is the strangest bit about it, but we've also got some tips for completing the other, grindier steps.

How to start the Lumina Destiny 2 quest

Inside the chest, you'll find a System Positioning Device. This will tell you where your next chest is, but the location you're assigned is random and changes every hour, on the hour. It tells you exactly where to go though, and it's usually in or near a Lost Sector, so it shouldn't be hard to find. Alas, we can't really help you with this step since there are a zillion possible locations. If you're feeling lost, try this map tool from lowlidev.

Wherever it is, find your chest and open it to claim Rose, a prototype version of Lumina. Here's where the quest really begins, so put on your grinding pants.

You can do this anywhere in the game, so feel free to work on some challenges, bounties, or triumphs in the process. For fast Orbs, I recommend Blind Well or the Menagerie. Use fully Masterworked weapons to generate Orbs on multi-kills, and use burst-damage Supers. Nova Bomb, Thundercrash, and Blade Barrage are ideal, as they make lots of Orbs quickly and let you get back to firing your Masterworked guns.

Get kills without reloading, complete a Nightfall with 50,000+ points, and complete activities with Rose equipped

This step is a three-parter. The 50K Nightfall is easy enough, and you can get the consecutive kills in bursts - 20 here, 11 there, etc. - with any weapon, so you should get them naturally. It's the activities that take a while. You've got three options: Blind Well, Escalation Protocol, or Black Armory Forges. Again, you can mix these into your normal grinds (like the Black Armory Forge triumph), but for the fastest progress, I recommend Heroic Blind Well completions.

Now it's time to do some more activities, but with Rose equipped this time. If you can put a group together, running the Menagerie with five other Rose wielders is definitely the way to go. Otherwise, you can run a fast Strike like Lake of Shadows or just grind out the Heroic Strike playlist. Don't go it alone unless you absolutely have to - you can find like-minded Rose wielders on LFG apps and forums, and having just one or two more Roses in the fireteam really speeds things up. For reference, a solo Strike gives 3% progress, but doing a Strike with two other Roses in the team gives 12%.

Generate 50 more Orbs of Light, get hand cannon kills in the Crucible, deny an Invader in Gambit

You can make these 50 Orbs wherever you made the last 250. Better still, you can use any hand cannon to get kills in the Crucible - it doesn't have to be Rose. I'd recommend Austringer, Thorn, Ace of Spades, or The Last Word. If you're not a Crucible fan or you just want to speed up the grind, play with some friends and have them use hand cannons; kills are shared between fireteam members.

The Gambit Invader denial is the trickiest part of this step, but it can also be the fastest if you know what to do. Basically, you need to get a "Not on My Watch" medal by killing an Invader within 10 seconds of their appearance and before they kill anyone on your team. You can kill the Invader with any weapon or ability, but to make sure your denial counts toward the quest, I'd keep Rose equipped. This quest step feels pretty inconsistent. I denied multiple Invaders within seconds of their invasion without Rose equipped and they didn't count toward the quest. After I put Rose on, my first denial counted. So I say just play it safe and use Rose.

To kill Invaders quickly, you'll want to watch the Gambit mote counter to see when the enemy team is going to invade (at intervals of 25 motes). You should also keep track of where your teammates are in the map. If everyone is in the left and middle thirds, for instance, the Invader will generally spawn in the rightmost third of the map. And remember, Invaders will keep coming during the Primeval boss fight, so be ready. I'd recommend using Izanagi's Burden, Truth, any machine gun, your best sniper rifle, or a sure-kill super like Golden Gun, Chaos Reach, or Thundercrash.

Last step, and probably the easiest one. Load up the Will of the Thousands Strike on Mars with Rose equipped. You'll see Hive Crystals throughout the Strike. You need to use Rose to break 11 of these crystals. Trust me, this is not hard. There's like 40 of them in the Strike and they're all incredibly obvious. Hell, you can get like 16 in the first three minutes. Shooting the crystals is less of a challenge and more of a buff, to be honest. Breaking a crystal grants Super and ability energy, so even after you've broken 11, you can keep shooting them to speed up the Strike.

Shoot all the crystals, blitz through the Strike, kill Xol at the end like normal, and you'll get your Lumina. Congratulations! Go support your teammates and kick some ass in the process.