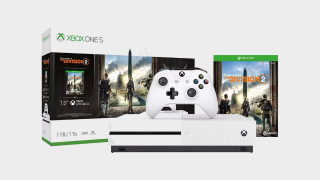 We're gearing up for a totally packed release season, and if you don't have an Xbox One, you might be thinking about getting one soon. Now's a great time to go ahead and splurge, especially since there's an excellent deal going on that will net you two new games with the system instead of one.

You can grab the Xbox One S 1 TB bundle with The Division 2 from Newegg for just $229 right now, $70 off its typical price of $299. That's a 23% savings. The Xbox One S has HDR support, can play 4K Blu-rays (but not games), and it's a bit smaller than the normal system. But if you're looking for a base console to get started with, it's still a nice option, especially at this price.

Not only do you get The Division 2 as part of the bundle, but Newegg is throwing in a copy of Madden NFL 20, which is a $60 value. Given that the game just debuted on August 2, you're getting one sizzling deal here. If you bought the bundle at regular price and Madden NFL 20 separately, you'd be paying over $360. Ironic, since it's the Xbox One, and not the Xbox 360, but, you know. Bottom line is this will save you plenty of cash.