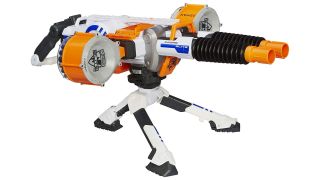 There are Nerf guns, and then there are Nerf gun emplacements. Normally you'd need to spend $100 or more on the kind of firepower that could defend a position from an entire enemy Nerf war team all by itself, but not today. Just for Cyber Monday, you can pick up a Nerf N-Strike Elite Rhino-Fire Blaster for $69.99 at Amazon, a very tempting savings of $30 off the standard price. Speaking of which, can you really put a price on laying down covering darts while your allies move into flanking position?

The Nerf N-Strike Elite Rhino-Fire Blaster is a true Nerf turret. Its twin barrels can be brought to bear in a fully automatic firing mode thanks to a battery-powered motor. Each barrel is fed by its own removable 25-dart drum, and they can also fire one dart at a time if you partially depress the firing button. The blaster can be mounted on an included tripod for optimal accuracy and stability while firing automatically, or pop it off and carry it by its top handle for the true "Jesse Ventura in Predator" experience.

Nerf says this fine plastic armament can launch darts up to 90 feet, and it is fully capable of unloading its entire armament of 50 darts (all included, of course) in one cathartic burst. It is Serious Business.

Nerf N-Strike Elite Rhino-Fire Blaster | $69.99 at Amazon (was $99.99)
Normally you'd need to drop a Benjamin on Nerf power of this magnitude, but you can get two ammo drums and a tripod worth of Nerf firepower for $30 less with this Cyber Monday deal.View Deal

That package includes almost everything you need to head straight into glorious Nerf combat. Don't forget to pick up 6 D batteries to power all that blasting speed - this pack of 12 will give you two full charges. If you want to reload without having to hunt down all those darts (that could, again, be up to 90 feet away), you'd be well served by this official 250-piece refill for N-Strike Elite darts. Then round out your armament with this guide to more Cyber Monday Nerf savings.

Complement your plastic haul with some Cyber Monday game deals.