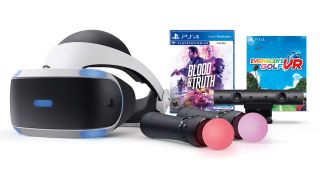 If you’ve not dipped a toe into the wonders of VR yet, PlayStation’s hoping to change your mind with a couple of new bundle deals. The first combines PSVR with a PlayStation Camera, the new virtual reality edition of Five Nights at Freddy’s, and Trover Saves the Universe, a bizarre adventure from the co-creator of Rick and Morty. It’ll cost $299 and is available from May 25 2019. The second pack features PSVR, the PlayStation Camera, Blood & Truth, Everybody’s Golf, and 2 Move controllers for $349. That offer launches slightly later on May 31 2019. You can preorder both via Walmart right now.

PSVR + PS Camera + Trover Saves the Universe + Five Nights at Freddy’s VR| $299 at Walmart
Get a whole lot of weird with a side of spooky in this PlayStation VR deal. It’s available May 25 2019.View Deal

In terms of value, there are cheaper PlayStation VR deals out there but none pack 2 brand-new games for less than $300. Including a pair of Move controllers with the Blood & Truth deal is even better; because you'd usually be paying $50 more to get a pack like that. With that in mind, the two bundles above make you a pretty great saving.

If you’ve not heard of Trover Saves the Universe, it’s a mega-odd puzzle platformer with a quirky sense of humor. As explained on its PlayStation page, “your dogs have been dognapped by a beaked lunatic named Glorkon who stuffed them into his eye holes and is using their life essence to destroy the universe”. Simple, right? Meanwhile, action-adventure Blood & Truth lets you battle through a “crime-ridden London underworld” to rescue your family from the mob. Cockney accents, inbound. Finally, Five Nights at Freddy's and Everybody's Golf bring the beloved franchises to virtual reality.