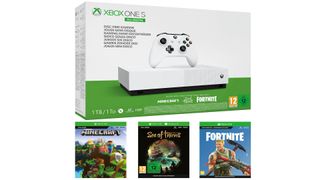 In the market for a new console but don't want to break the bank? Then you'll want to give this awesome Xbox One S Black Friday deal a look. For just £129, you can get your hands on an Xbox One S All-Digital Edition with a 1TB hard-drive, a one month subscription of Xbox Live Gold, and three awesome multiplayer games to use with it in Fortnite, Sea of Thieves, and Minecraft.

Obviously, those three games are all digital downloads – the Xbox One S All-Digital Edition does not include a disk drive – but they aren't the only awesome games available for it. In fact, we've been tracking all of the awesome Xbox One X Black Friday deals and the best Black Friday game deals to find the best discounts on Xbox One games and accessories. Oh, and if you want to make this purchase even better, why don't you grab an Xbox One controller cheap and look out for the best Xbox One headsets.

Oh, and if you really want to make this a truly incredible purchase, you really should look into getting your hands on Xbox Game Deals. It's a subscription service that gives you access to hundreds of excellent games for one low price. We are tracking the Xbox Game Pass deals for you here.