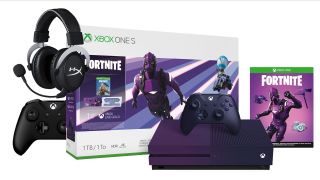 Sound the alarms: Walmart's own version of the Amazon Prime Day game deals have begun in earnest, and there are some pretty fantastic offers on show. They've thrown in what could well be the best Xbox One S bundle we've seen for a while, and it offers mega value for money. You can choose from one of five Xbox One S consoles (including the purple Fortnite edition), a spare official wireless controller, and the HyperX Cloud X gaming headset, and get it all for just $299. That means you're essentially getting those extras for free, saving you up to $70 overall. Nice.

These aren't the only options, either. This discount allows you to choose from four  different colors of controller, and two headsets (the HyperX or Turtle Beach Stealth 300). Just remember, some alternatives will add a little more to the overall price.

The Xbox One S usually goes for around $299 by itself anyway, so getting all these bonus items too is a real win. What's more, they're not rubbish extras either - you're getting high-quality bits of kit. That alone makes this one of the better Amazon Prime Day offers we've seen over the last 48 hours, and the sale isn't over yet.

Why get an Xbox One S instead of these Xbox One X deals, though? If you're wondering what the difference between them is, we've got your back. For starters, the S tends to be cheaper because it's not quite as powerful. Although it can't play games in 4K (that's what the X is for), it's still able to run them in standard HD realy well and it still offers HDR support. As a result, it's the ideal entry point if you're buying your first console or you want an Xbox to complement your PS4.

For more Walmart-related discounts, head over to our guide to Walmart game deals.