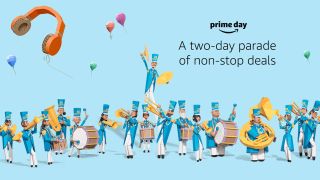 Another year, another Prime Day! And with so many great offers expected to come with the Amazon Prime Day game deals, which go live between July 15 and 16, we thought we’d save you the trouble of wading through the masses of stuff and have instead handpick the five gaming essentials you must buy on Prime Day. Finding exactly what you want for the price you want can be hard - that's why we've created a guide on how to find a great Prime Day bargain. However, we've also used our collective knowledge to guide you through the gaming kit you need to watch for on Prime Day, based on current trends and sales from previous years.

Prime Day is all about treating yourself and bagging a bargain, but the two-day deal period can often make what should be an exciting time a hectic rush. That's why we've opted to keep things nice and simple, collating the top five gaming essentials you must buy on Prime Day – clearly outlining why while saving you money in the process. So, without further ado let's get into it!

"Who doesn’t love free games?" That's likely the question that was asked when Sony and Microsoft were organising their respective online subscription programs. Picking up a PS Plus deal or an Xbox Live deal grants you access to all the joys of online gaming (letting you indulge in bombastic multiplayer experiences like Call of Duty and Battlefield), but being a subscriber also nets you a minimum of two free games per month. The current outline works as two free PS4 games for PS Plus subscribers, while Xbox Live members can snap up two free Xbox One games and two free compatible Xbox 360 games.

A 12-month subscription for either would typically cost you around $60, but we fully expect that number to bump down significantly during Prime Day to around $40. You can't forget the price drops that'll be happening across other subscription tiers either; it’s highly likely that you could save more money by, say, combining a three-month and a 12-month sub together.

A gaming headset has the power to seriously enhance your gaming experience, on or offline. After all, no-one wants to struggle to hear you speak when trying to co-ordinate tactics as a team, and the advantage of being able to hear enemies sneaking up on you is a boon. So, you’ll want to grab one of the best Xbox One headsets or best PS4 headsets this Prime Day. You're looking for one that is comfortable, has great sound quality, and features a crystal-clear microphone. A popular favourite amongst GR+ readers is Razer’s Kraken TE, which works as a great all-rounder and is cross compatible with PS4, Xbox One, PC and even Switch. The Kraken TE has been known to drop in price every so often so keep your eyes peeled on Prime Day.

Of course, there are plenty of gaming headsets out there that are specifically geared towards those with an affinity eSports or competitive play. The Turtle Beach Elite Pro 2, for example, usually retails for $200, but it’s almost a dead cert you'll be able to get it much cheaper on July 15.

3. More storage for console or PC

Games look better than they ever have before. An unfortunate side effect of new releases being so graphically intense, however, is that the amount of space required to store them on your console has increased substantially. Just as an example, last year's Red Dead Redemption 2 had a whopping install size of 107GB on Xbox One – that’s a lot of storage taken up on a 500GB Xbox One S for just one game. Luckily, you can add more storage to all three of the major console platforms, so why not bag a bargain and expand this Prime Day 2019?

Adding more storage to a Switch is a relatively simple endeavour; simply buy a Nintendo Switch SD card and pop it in the back slot. You can get SD Cards of all storage sizes, but a 128GB one should see you through nicely. Xbox One and PS4 are a little bit different, but the easiest way is to hook up an external SSD or HDD via USB connection.  While SSDs are quicker, they're more expensive and don’t add enough to your experience to truly justify the cost. The best PS4 external hard drives, and Xbox One external hard drives are the way to go.

Though you might not think it, pretty much everyone could benefit from having a spare Xbox One controller or PS4 controller around. Maybe you want to recreate the good old days and kick back with friends for some split-screen fun on the couch or would like to keep one spare in the event something bad happens to your main gamepad. Both are solid reasons and are a more than worthy excuse to pick up a cheap spare controller during the Prime Day sales.

A standard Dualshock 4 controller for PS4 is available in an array of attractive colours outside the typically Jet Black and Glacier White. The problem is that they almost always retail for $65 brand new – not on Prime Day 2019, however, where they usually drop to $40 or less. The same goes for Microsoft’s range of official wireless Xbox One controllers, which can also be picked up in an attractive shade of your choosing.

Regardless of budget or quality preference, Prime Day is the best excuse to pick up a brand new 4K TV to play the latest games on. You’ve likely heard a lot said about 4K TVs, but it’s really on OLED and QLED televisions where we’re expecting the biggest price drops. We won’t bore you with all the techno mumbo jumbo right now (check out our best gaming TVs for more info), but you can be assured that either TV type will render your games using sharper, more vibrant visuals that work to absorb you more while playing.

In terms of specific recommendations, we’d say keep an eye on LG's E8 series OLED TVs and Samsung’s Q60 range. Both these screens are usually top notch, and they sell for more than $1500 normally, so Prime Day be a could way of bagging this at one hell of a reduced price.