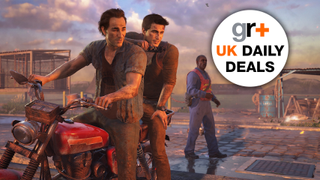 On the hunt for some gaming presents now we've hit December? There's still plenty of Cyber Week discounts across various retailers and some great PS4 deals and Xbox One offers. There's also a stack of bargains to be had if you're on the hunt for individual games or even a 4K TV. Consider us your GR+ shaped elves, finding the best deals online so you don't have to.

Today's deal of the day is an excellent offer bundle from Zavvi that'll net you a PS4 with 1TB of storage with Uncharted 4, Driveclub AND  The Last of Us Remasteredfor £239.99.

View deal: PS4 Slim 1TB with Uncharted 4, Drive Club and The Last of Us Remastered for a money-saving £239.99 from Zavvi.

Take a look at the best UK game deals below – and come back tomorrow for more PS4, Xbox One and hardware bargains.

PS4 Slim 500GB: Pick up Sony's slimline console with double storage as well as Uncharted 4, Driveclub and The Last of Us: Remastered for only £239.99 at Zavvi.

This bundle from Zavvi saves you an incredible £70 and nets a serious haul of Naughty Dog related goods. Uncharted 4 stands out as one of the PS4 games of the year and The Last of Us: Remastered makes the apocalypse even more beautiful. Plus, all that storage space means you can download all the games you want without worrying about having to constantly keep deleting others.

View Deal: PS4 Slim 1TB with Uncharted 4, Drive Club and The Last of Us Remastered for a money-saving £239.99 from Zavvi.

PS4 Slim 1TB: In this brilliant bundle you can get the new slim console with bonus storage, Uncharted 4, Drive Club and The Last of Us Remastered for a money-saving £239.99 from Zavvi.

PS4 Slim 500GB: Pick up Sony's slimline console alongside Overwatch and Ratchet & Clank for £239.99 from GAME.

PS4 Slim 500GB: If you just want the console and a single game, Call of Duty: Infinite Warfare comes with this PS4 Slim for £219.99 from Zavvi.

Xbox One S 500GB: The Storm Grey version of Microsoft's console comes with a bonus wireless controller and the brand new Final Fantasy 15 for £249.99 from Amazon.

Xbox One S 500GB: If someone wants Minecraft this Christmas, you can get it alongside Microsoft's latest console, an extra controller and a 2 month Now TV Sky Cinema pass for £229.99 from GAME.

Mafia III (PS4) Time to travel to New Orleans for £29.95 at The Game Collection

Deus Ex: Mankind Divided (PS4): Pick up the Day One Edition for £19.95 at The Game Collection

Borderlands: The Handsome Collection (Xbox One): Catch up with the remasters for only £14.85 at Simply Games Ltd

Elder Scrolls V: Skyrim Special Edition (Xbox One): Be the Dragonborn for £24.99 at Amazon UK

Tales From The Borderlands (Xbox One): Feeling handsome? Grab it for £5.99 at GAME.

Seagate Hard Drive:  Looking for external storage for your Xbox One? Grab this Seagate Expansion 4TB External Hard Drive for £99.99 at argos.co.uk

Xbox One Wireless Controller: The Gears of War 4 JD Fenix Limited Edition is now £39.99 at GAME

Xbox One Wireless Controller: Fancy a new controller in black or blue? Head to GAME and nab one for £34.99.