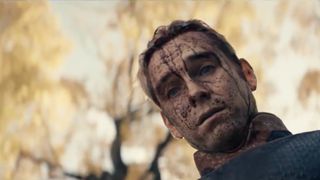 The Boys season 2 cast is expected to appear at CCXP in Brazil later today and already the first teaser for the new season has appeared online. This was no leak, but an official upload by Amazon, who has been quick to take the teaser trailer down from their official channels. However, thanks to the internet being the internet, the trailer is now readily available on social media.

A new trailer for ‘THE BOYS’ Season 2 has been officially released. (Source: @Amazon) pic.twitter.com/HzSjNki9EgDecember 5, 2019

If the above source has been taken down, then let us bring you up to speed on what happens. The Boys season 2 trailer starts with Homlander, covered in blood, descending down to greet someone, presumably his son.

The footage then cuts to a montage of clips from the forthcoming season, including one of A-Train, who was presumed dead after suffering a heart attack last season. He's still not doing too well, as pictured in hospital. Starlight, The Deep, and Billy all get quick look-ins, as does Mr. Edgar (Giancarlo Esposito), who will play a much bigger role this season.

Oh, and there's lots of blood. Gallons of it. Blood spraying onto windows; onto paintings; onto floors; walls. You name it, there's probably blood on it. This is not a show for the squeamish – though anyone who watched season 1 knows that already.

As noted by EW, a couple of new faces are missing. Aya Cash, who will play Stormfront, does not make an appearance. Neither does Claudia Doumit as congresswoman Victoria Neuman, or Goran Visnjic as the church leader Alistair Adana. There's also no sign of Patton Oswalt.

Hopefully, when The Boys season 2 cast and crew take to the stage later, we'll have an official first look at the new season. Also at CCXP, new Birds of Prey footage was shown to the audience, which you can read about here.