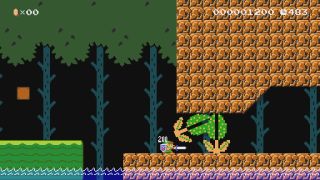 Super Mario Maker 2's upcoming update will add Link as a playable character, complete with a collection of classic weapons and moves from The Legend of Zelda. The free 'Legendary Update' arrives Thursday, December 5, and adds new enemies, creator tools, and a new speedrun mode using stages made by Nintendo.

#SuperMarioMaker2 is getting a legendary update! On 12/5 the free Ver. 2.0 update will add Link from The Legend of #Zelda as a playable character, new course parts, and a new gameplay mode.https://t.co/rOVgLj1n60 pic.twitter.com/rJtLj8iGv7December 2, 2019

Accessing Link is as easy as finding the Master Sword power-up, which transforms Mario into Link. In Link form, you'll have access to the legendary Master Sword and Hylian shield, a bow and arrow, bombs, dash attack, and down thrust. You can shoot your bow in three different directions, use bombs to get past dead-ends, and design puzzle levels around Link's unique moveset. Though, the Master Sword power-up is only available in 8-bit Super Mario Bros. courses.

Perhaps equally exciting is the new Ninji mode, which presents Nintendo-made courses for you to speed through as fast as possible, with other players appearing as "ghosts" akin to Mario Kart's spectral competitors.

Finally, the update adds a couple of new enemies: Spike, the green, shelled-monster who spits spiky balls; and Pokey, the animated stack of cactus pods. Then there's Frozen Coins, which can only be collected after fire melts their icy casings, hidden blocks called P Blocks, and blocks that give Mario a speed boost called Dash Blocks.

Super Mario Maker 2 is a game ripe with near-limitless potential for updates, and I'm glad to see Nintendo incorporating elements from their other franchises to keep things fresh. I can only hope we'll soon see the Poltergust from Luigi's Mansion or the Villager from Animal Crossing.

Black Friday has come and gone, but it's not too late to take advantage of Cyber Week game deals!