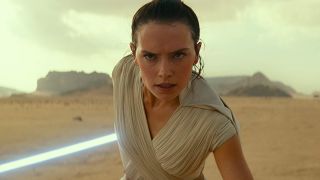 The first Star Wars: The Rise of Skywalker reactions are in, courtesy of last night’s world premiere in the States. Don’t worry, no spoilers below, but if you want to go in blind then give this one a swerve. If you’re curious and willing to give into the Dark Side of kneejerk opinions, here are the world-first Star Wars: The Rise of Skywalker reactions – the good, the bad, and the downright emotional.

Rise of Skywalker is "satisfying"

Out of all the reactions you’ll see, the S-word – “satisfying” – is the one you’ll see crop up the most. Make of that what you will. You could see it as damning it with faint praise, or you could see it as a job well done by J.J. Abrams and the team.

#StarWars #TheRiseOfSkwalker reaction: One word: EPIC! A satisfying crowd pleasing adventure, and a fitting end to the saga! My favorite of the three! Can't wait to see it again!December 17, 2019

Lot to take in with #riseofskywalker It is the big adventure, lightsaber adventure I hoped for. A few things I still wonder if it was necessary but it was a very satisfying end to this new trilogy.December 17, 2019

Just stepped out of #TheRiseofSkywalker. It’s an immensely satisfying and MASSIVE end to the saga. It somehow addresses issues, problematic characters, and most unanswered questions from The Force Awakens and The Last Jedi too. pic.twitter.com/TMKeXCXuUxDecember 17, 2019

Let the hate flow through you

Okay, okay. It’s not quite hate. But the Rise of Skywalker reactions aren’t as overwhelming positive as you might expect. There are a couple of vague sticking points that may get expanded on over the coming days and weeks (or months and years if you take The Last Jedi into account). Speaking of which…

STAR WARS: THE RISE OF SKYWALKER is certainly the most convoluted Star Wars. There is a lot I liked, but the first half gets so bogged down with exposition and new plot and doodads and beacons and transmitters, it feels like it should have been three movies on its own.December 17, 2019

#TheRiseofSkywalker is a lot. It’s like 9 movies of plot in one. Going to take me about 9 days to process.December 17, 2019

The seams from Disney’s ‘Star Wars’ director changes, rushed production schedules, etc., are still present in #RiseofSkywalker, but most fun, gorgeous, rewarding of the films.Not sure Palpatine/Empire needed 3rd trilogy, but what matters is conclusion of Kylo-Rey: it delivers. pic.twitter.com/gv9MlRaZOEDecember 17, 2019

As a Last Jedi follow-up

Star Wars: The Last Jedi was among the most divisive movies in the Star Wars universe. As a continuation of Rian Johnson’s story, some are similarly split. Rise of Skywalker either does it justice or does a big ol’ thumb in the nose to the eighth episode.

The Last Jedi and #TheRiseOfSkywalker work together perfectly, just like: pic.twitter.com/42gViGNQJzDecember 17, 2019

RISE OF SKYWALKER could only have been ruder to Rian Johnson if they had motion-smoothed itDecember 17, 2019

Rise of Skywalker brings the feels

Whether it’s laughing, crying, or hollering, Rise of Skywalker is likely to elicit an emotional response from you. Here’s just a selection of those who got hit hard by the end of the Skywalker saga.

#StarWarsRiseofSkywalker reaction: JJ Abrams nailed it. He was able to bring a cohesive arc to this trilogy that feels like a fitting end to the saga as a whole. I’m so emotionally drained. Star Wars fans will be very happy.December 17, 2019

Footage of my face watching #TheRiseofSkywalker...JJ Abrams juggled that film & the scope of 42-years of storytelling, beautifully. I’m just in awe of the direction, cinematography & Williams’ score.It’s everything fans are hoping for & more. Abrams really did the impossible! pic.twitter.com/KE2E1xl2LVDecember 17, 2019

2/ There are SO many moments of pure audience delight. At one point in mid of #RiseofSkywalker, someone yelled "Yeah JJ!" and the whole audience erupted into cheers. This happened several more times. It is the most 'original trilogy' movie since the 'original trilogy'. pic.twitter.com/qPd9LBzov4December 17, 2019

I’m emotional, overwhelmed, surprised, shocked & stunned. More than anything, I’m happy. Thanks for coming through one more time, Star Wars.#TheRiseOfSkywalkerDecember 17, 2019

Tweeting through tears - #TheRiseofSkywalker isn’t the best Star Wars film, but it is the ULTIMATE Star Wars film. A truly stunning finale to a nine film saga. Only weird thing was the amount of screen time spent on characters wolfing down raw vidalia onions. I ADORED this movie.December 17, 2019

When people talk about #StarWars , they talk about their childhoods. Their best memories. The people they loved and shared it with.#TheRiseOfSkywalker brings back all those feelings. And then some.I absolutely loved it. And now I feel ... pic.twitter.com/5wkQh6v97GDecember 17, 2019

The best of the rest

There are dozens of reactions to The Rise of Skywalker out there – here are some more to whet your appetite.

#StarWars #TheRiseOfSkywalker is good. It’s big and full of surprises and, in the words of Luke Skywalker, “This is not going to go the way you think.” pic.twitter.com/nruJtzaMC4December 17, 2019

Epic. All of it. #TheRiseofSkywalker is a terrific finale that is just stuffed with so much of everything. Action, adventure — answers!! — humor, heart, love, and grit. I spent the entire second half with tears in my eyes - a wonderful way to end the Skywalker story pic.twitter.com/K2NhHSGWzMDecember 17, 2019

#StarWars #TheRiseOfSkywalker...OH MY GOD! I am absolutely blown away! I’ve never been so satisfied by a film. This is the end of an era and a franchise that has defined my life and this did it justice in a way I didn’t imagine it could. You WILL cry.... pic.twitter.com/Jfx5bzdZOODecember 17, 2019

Just stepped out of #TheRiseofSkywalker. It’s an immensely satisfying and MASSIVE end to the saga. It somehow addresses issues, problematic characters, and most unanswered questions from The Force Awakens and The Last Jedi too. pic.twitter.com/TMKeXCXuUxDecember 17, 2019

Not long to go now! Get a story refresher on all things a galaxy far, far away with our complete Star Wars timeline.