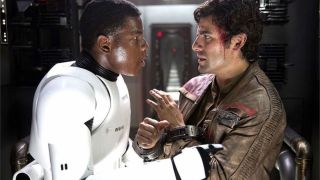 Star Wars: The Rise of Skywalker director J.J. Abrams has revealed the moment from Star Wars: The Force Awakens – his first movie in a galaxy far, far away – that he wished he had “done better.” It’s also a scene that many fans at the time picked out as being out of step with a certain character, so it’s interesting to hear Abrams be so reflective about it.

“I always look at what I have done and see things that I wish I had done better or differently,” Abrams told IGN before saying, “I wish that Chewie hadn’t walked past Leia in the third act of The Force Awakens after Han died.”

For those of you who can’t quite think back far enough to the halcyon days of 2015, Abrams is referring to Chewie’s lack of response to Leia after Han Solo was killed by his son, Kylo Ren. Leia and Daisy Ridley’s Rey share a touching moment and embrace, but there is nothing between the pair of Chewbacca and Leia, the two of whom count as the most important people in Han’s life. It seemed odd then, and it still seems odd now. Still, at least Abrams is suitably reflective ahead of Rise of Skywalker's release.

While Abrams didn’t reveal what else he would have maybe changed from the seventh episode of the Star Wars saga, he does freely admit, “There are things all over the place I always know I could have done better, but that’s part of learning, I guess.”

Get ready for Rise of Skywalker with our complete look at the Star Wars timeline, including sequels, prequels, and the original trilogy.