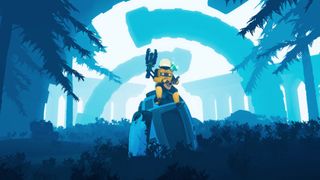 Risk of Rain 2 completely turned the mechanics of the original game upside down. It took a side scrolling roguelike and completely converted it into 3D, taking everyone by surprise.

Now, Risk of Rain 2 is getting its first content update since it launched earlier this year on March 28. Scorched Acres includes a new character, Rex, that is completely different from the other playable characters, some of which were carried over from the first game.

The first Risk of Rain 2 content update, Scorched Acres, will be available on June 25th to everyone in Early Access!https://t.co/gjBpFIBo5M pic.twitter.com/ImICjMcnK4June 21, 2019

Hopoo Games laid out a road map with four updates before Risk of Rain 2 leaves Early Access next year and Scorched Acres is the first of them. They said this June update should include a new survivor, stage, boss, items, and equipment.

If you're new to Risk of Rain, here's a bit from the Steam page that sums the game up well.

"The classic multiplayer roguelike, Risk of Rain, returns with an extra dimension and more challenging action. No run will ever be the same with randomized stages, enemies, bosses, and items. Play solo, or team up with up to four friends to fight your way through hordes of monsters, unlock new loot, and find a way to escape the planet."

We don't know much else about the expansion at this point, but Hopoo games did promise a full breakdown once the update launches next week.

Looking for some more indies to get excited about? Check out the best indie games we saw while at E3 2019.