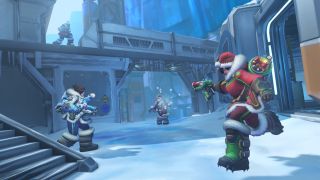 The Overwatch Winter Wonderland 2019 event is live, and it's bringing four new Legendary skins, three Epic skins, a brand-new game mode, and more. The limited-time event will run from December 10 to January 2, with three different challenges taking place each week that offer two sprays and an Epic skin apiece for wins. Check out the trailer for Overwatch's Winter Wonderland 2019 below.

As usual, you'll be able to unlock any of the skins from the three previous Winter Wonderland events, so now is your chance to snag that Sugar Plum Fairy Mercy you've been pining for. The event will also drop alongside a patch that will nerf shields and add new game mode options while queuing for matchmaking. But, about those seven new skins, which are as follows:

Jötunn (Legendary): Doomfist, everyone's least favorite hero to get punched by, is clad in Viking armor in a nod to the giants of Norse mythology.

Rat King (Legendary): Reaper's holiday outfit is an homage to the Mouse King, the villain in The Nutcracker. It somehow makes bejeweled rats a total vibe.

Rime (Legendary): The only skin Overwatch announced prior to the Winter Wonderland event launch, Rime Sigma is a nod to the Death Knight class in World of Warcraft.

Holly (Epic): To combat the devastating Moira nerf dropping with this event (her healing spray was reduced by 15 HP per second), the eugenicist is getting a cool elf skin, complete with green hair and lush red coat.

Snow Angel (Epic): She got a great skin last year, she's getting a good skin this year. Mercy's Snow Angel look keeps her classic silhouette but drenches it in icy blue tones.

Ugly Sweater: 76 (Epic): We love an ugly Christmas sweater, and so does everyone's favorite LGBTQ+, cybernetically enhanced super soldier. This skin is one of the best of the event and you can't tell me otherwise.

The Winter Wonderland event for this year includes a new mini game mode, Snowball Deathmatch, an eight player free-for-all where everyone is Mei (my worst nightmare). The eight Meis will all have a modified snowball gun (similar to the gun in Mei's Snowball Offensive, another mini game), but will also get a new ability called "Catch," which allows players to snag an enemy snowball shot at them and add them to their ammo count. The first player to get 15 eliminations wins.

Overwatch's Winter Wonderland event is usually the most popular event of the year - there's nothing like Overwatch-ing during the holiday season, and everything in-game is just so damn festive. Make sure to log on before January 2 to get a taste of the Overwatch holiday cheer.

If this got you excited for Overwatch 2, know that Blizzard will "explore what endgame means for Hero Missions" in the upcoming sequel.