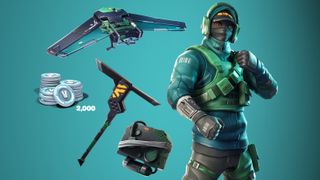 With 200 million players and counting, Fortnite is the most popular game in the world right now. And as one of the least demanding in terms of raw processing power, it comes as no surprise that Fortnite is now being bundled with select mid-range Nvidia graphics cards as well as some pre-built gaming desktops and laptops.

At least "for a limited time" only, or until January 29 at the latest, the GeForce GTX 1060, 1070, and 1070 Ti are being packed in with the Fortnite Counterattack set, which includes the following in-game items:

While the reflex outfit and pivot glider are classified as "rare," according to Fortnite developer and publisher Epic Games, the angular axe is described as "uncommon." V-Bucks, on the other hand, usually cost $9.99 per 1,000 units, meaning the 2,000 V-Bucks in these bundles are worth around $20 in real-world cash. V-Bucks can be used to purchase Battle Passes, skins, and other items in the Fortnite Item Shop.

That’s nothing to write home about in terms of sheer value, especially considering the fact that some GPU bundles contain one or two full-fledged triple-A games worth $60 a piece. But if you’re a die-hard Fortnite fan who’s in the market for a new graphics card anyway, these combos may very well put you over the fence. Plus, until January 7, 2019, qualifying GTX 1060, 1070, and 1070 Ti graphics cards also ship with a free copy of Monster Hunter: World, a $60 value.

As for the pre-built systems you can buy as part of this deal, you can head over to Walmart, Amazon or Newegg for the extensive full-length catalog. Of these, the best value if probably the 15.6-inch HP Pavilion gaming laptop sporting an Nvidia GeForce GTX 1060 for $899 right now. Nvidia suggests that upgrading from a previous-gen GTX 960 to a modern GTX 1060 will result in performance gains of up to 74%. Moving from a GTX 970 to a 1070 will see to it that your frame rates are bumped by up to 60%.

On its own – and now with the Fortnite Counterattack bundle in tow – you can find the GTX 1060 for less than $200 (this EVGA model is currently $179.99 over at Newegg). However, we aren’t keen to recommend a 1060 with 3GB of video memory. Instead, you’re better off shelling out a little bit more for the 6GB GTX 1060 Mini from Zotac should you be on the lookout for meaningful improvements from your GTX 960 or lower.

In Nvidia’s own words, "if Victory Royale is your mission, the GeForce Fortnite Bundle is just for you." We’re not sure how buying a new graphics card will keep us from hiding in the bushes in every match until we’re inevitably sniped down by enemy fire, but if you’re already an ardent Fortnite player in dire need of a better PC setup, perhaps now is the time to snatch one up. Or you can check out 2018's coolest pre-builds with our best gaming PC guide.