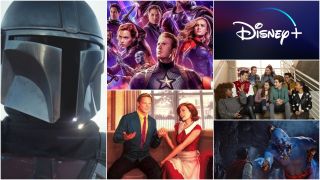 Welcome to GamesRadar's picks for the best new Disney Plus movies and shows you can watch right now! Every week, our team goes through what's new on Disney Plus and picks the very best to feature on this updating list.

From the Baby Yoda show to momentous musicals, these are the best new Disney Plus movies and shows to watch right now. Now, let's get streaming!

Star Wars: The Clone Wars is back for its final season, bridging the final gap between Attack of the Clones and Revenge of the Sith. How will this all go down? Who can say. But we're incredibly excited to return to that galaxy far, far away.

The fourth movie in Pixar's Golden Goose franchise is now available on Disney Plus – all all in time for Oscars weekend. Toy Story 4 is nominated for Best Animated Film, and – unless there's a surprise upset from Klaus – could very well win.

Around the World in 80 Days (February 1st)

Disney's Around the World in 80 Days may not be the best version of the iconic story – but it is the most star-studded. Come for Jackie Chan, Steve Coogan, and Arnold Schwarzenegger, stay for Kathy Bates, Owen Wilson, Luke Wilson, John Cleese, Will Forte, Mark Addy, and entrepreneur Richard Branson.

When the Aladdin trailer first debuted Will Smith's Genie, everybody thought the Disney flick would be an utter disaster. Somehow, director Guy Ritchie managed to make this one of the most enjoyable live-action adaptations yet. What's more, thanks to the movie's surprising qualities, Aladdin went on to become a huge box-office success. While perhaps not as great as the original animation, this one's still worth a watch.

There are, frankly, few films as funny or as heartfelt as Cool Runnings. That may be the nostalgia talking, but revisiting this wonderful movie still warms you soul. As the Jamaican bobsled team says, "Feel the Rhythm! Feel the Rhyme! Get on up, it's bobsled time!"

We knew The Mandalorian would be good, but this good? Since concluding in December, dozens of publications have claimed that the Star Wars show represents the future of the franchise – one beyond big-screen trilogies and spin-off stories. The Baby Yoda show impresses with its breezy pace and fantastic creatures. We cannot wait for The Mandalorian season 2.

Controversial upon release, many Star Wars fans have come to adore The Last Jedi for steering the franchise in a new direction and taking risks with beloved characters. While The Rise of Skywalker may have retconned a few ideas from Episode 8, Rian Johnson's movie remains a glorious addition to the series – and perhaps the best cinematography we've yet seen in a Star Wars film.

Taika Waititi made a Marvel movie unlike any other Marvel movie with Thor: Ragnarok. The director managed to take arguably the most boring Avenger and transform him into one of the group's funniest. Throw in an excellent Tessa Thompson, Jeff Goldblum, and Mark Ruffalo (as a returning Hulk) and Ragnarok really is one of the best MCU movies to date.