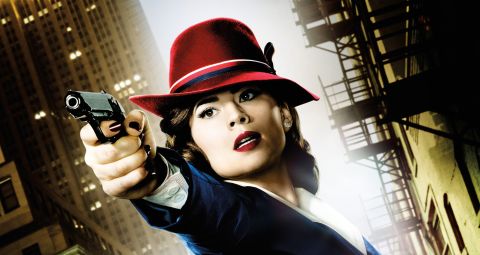 Marvel may have perfected their billion dollar formula on the big screen, but on TV they’ve been a studio in search of a format. After Agents Of SHIELD spent 17 episodes finding its feet clearly a new approach was in order. On the basis of this eight episode miniseries’ opening salvo Marvel has found its small screen sweet spot because Agent Carter is fabulous.

Picking up where the Agent Carter One-Shot left off in 1946, Captain America’s golden gal is stuck behind a filing cabinet at male-dominated SHIELD precursor the SSR. Battling with Jurassic gender norms means Carter is continually overlooked for missions, and generally lumbered with tedious coffee reconnaissance. But when a dangerous cache of experimental weapons is stolen from Howard Stark’s lab the playboy inventor is forced to go on the run, leaving Carter and Stark’s butler Edwin Jarvis in charge of retrieving the destructive “bad babies” and clearing Stark’s name.

Thrillingly plotted, impeccably performed and energetically directed, these first two episodes rarely put a foot wrong. It balances smart comedy, stylish spy-fi action and social commentary with the confidence of a show that’s been on the air for years. It’s not afraid to spill some blood either, with two or three brutal, knock down fights and a handful of shocking deaths. You haven’t lived until you’ve seen Peggy Carter take down a goon with a stapler.

So what is the shadowy organisation behind the theft of Howard Stark’s “bad babies”? In the comics Leviathan are a terrorist group that emerged from the Communist Bloc after World War II, the East European Hydra if you will.

Hayley Atwell is the show’s not-so-secret weapon. Glamorous, resourceful, quick-witted, strong-willed, kick-ass, vulnerable and never less than astonishingly watchable – Peggy is the MCU’s best female character by some considerable distance. It almost feels wrong for a performance like that to emerge from a 42" box in the corner of the living room instead of a 20ft tall cinema screen. Carter and Jarvis prove a surprisingly fun odd couple too. James D’arcy’s hilarious, overly-helpful butler contrasting with Carter’s headstrong agent whose only flaw is her insistence on going it alone.

Despite the distinct lack of superheroes it’s a corner of the MCU that you’re immediately happy to explore. Rather than rely on thudding namedrops its tale is weaved into the MCU organically, while Atwell and much of the crew provide a crucial connective tissue with the big screen behind the scenes. The first episode was penned by Winter Soldier scribes Markus and McFeeley, while episode two was helmed by one half of Winter Soldier brother directing duo Joe Russo, for example. It’s got some real visual flair too, with striking period set design, costumes and cars, alongside the odd bit of impossibly cool steampunk tech for good measure.

The creepy Quiet Men serve these first two episodes well, but Leviathan’s nebulous nature has left a villain vacuum that needs to be filled next week. The only real problem: Carter doesn’t get to wear that incredible red Stetson anywhere near enough. A hugely promising start, fingers crossed it coheres into a satisfying whole.

Colleen: “You know, there's a difference between being an independent woman and a spinster.”
Peggy: “Is it the shoes?”

You may recognise Spider Raymond (Andre Royo) as The Wire’s Bubbles or Fringe’s Henry Arliss Higgins, the taxi driver who helped Olivia out of a spot of bother during season three.

Speaking of Fringe, did the Quiet Man’s typewriter remind anyone of the quantum entangled telegraph used to communicate between universes in the much-loved JJ Abrams-produced show?

Anton Vanko, who leads Carter to the Roxxon oil refinery in the first episode, is the father of Iron Man 2’s Ivan Vanko, aka Whiplash. In the comics Vanko senior fought Tony Stark as the Crimson Dynamo.