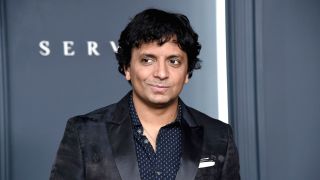 M. Night Shyamalan is synonymous with jaw-dropping twists. From the iconic “I see dead people” moment in The Sixth Sense, to that clover tattoo in the final act of Glass, the writer/director can pull the rug out from under you in a way few others can. While speaking to GamesRadar+ about Servant, the new Apple TV+ thriller which he executive produces, he revealed something we didn’t see something: he doesn’t like the word “twist.”

“I never think of it like that – the word ‘twist,’” Shyamalan says when asked about what makes a good twist. “Because it sounds so much like our intention, our endgame. In the end, I guess it’s like it’s more of a realisation, when you’re inherently in the genre of thriller, which is essentially like a mystery… there’s going to be an answer to the mystery. There’s going to be more clues. It’s a drop of information essentially. So, the character is learning a certain amount of information that they didn’t expect. That’s the genre we’re in.”

Expanding on why boiling things down to ‘twists’ might be reductive, Shyamalan says, ”A twist is almost like, ‘gotcha!’ and it was intended in a way that feels very calculated, especially when you’re doing point-of-view-driven storytelling. That makes it so you’re very limited about what’s going on outside this room, why we brought you here, that kind of thing. The audience is already on the edge.”

Shyamalan also spoke to us about binge watching, Servant, and the scene he was "amazed" Apple let him do. Read the full interview here.

New episodes of Servant release every Friday on Apple TV+