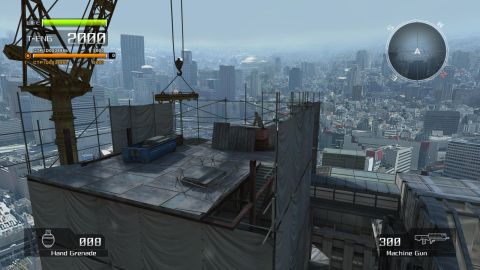 As familiar as we are with the 360 version, it took little time to get used to the PC control scheme. The biggest boon is, of course, the precision aiming, but nothing feels awkward, from reloading to firing your grappling hook to piloting the Vital Suits. The option is there to plug in a 360 controller, but if you had one, wouldn't you likely already have a 360 and thus, Lost Planet?

Still, as solid a game as it is, there are some shortcomings. Not everyone will love the no-nonsense, unforgiving approach to gameplay. Bosses are hugely difficult and thrash around so much that cheap hits and unblockable moves are common. You either accept this challenge or you don't. Grappling hook movement is cool, but limited in its execution. You go up or down, but not really any swinging. And, perhaps most of all, do PC gamers even have an interest in sitting down with a console shooter that came out six months ago? It's a fast game but certainly not on par with first-person shooters that dominate the platform.

Multiplayer is just as it was before - spectacular. Pitting 16 people against each other either solo or on teams is huge fun, using turrets, tanks, Vital Suits, disk grenades, gum grenades and all kinds of other goodies to put bodies underneath the snow. Post grabs, team elimination, deathmatch, all the typical modes are here. The maps handle the large number of players great, with tall buildings to explore and sneaky underground tunnels that link everything together. This is all based on extensive 360 playing though, as PC online time was cut short due to lack of online opponents. Still, from what we played, it was identical.

Even though Planet brings a sense of verticality to fragging with its grappling hook and flying Vital Suits, many may walk on by, incensed that another late console port showed up with no new content whatsoever. Yup, all the cool bonus maps that have since flooded the 360 are nowhere to be found.