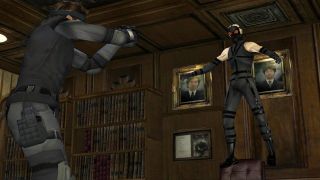 If you’ve ever picked up a Metal Gear Solid game in your life then you’ll know the series tends to, frankly, get a bit weird. From reading your memory card to making you play as a foppish whiner in its hotly-anticipated sequel, Hideo Kojima’s baby has never been one to play it by the books. That’s why it’s so refreshing to hear, then, that Jordan Vogt-Roberts, director of the Metal Gear Solid movie, is intent on keeping all the elements that make Metal Gear… well, Metal Gear.

Speaking to Screen Rant at San Diego Comic Con 2018, the Kong: Skull Island director gave us the most open look yet at what to expect from the upcoming video game adaptation.

Sounds promising and, whisper it, almost certainly confirms the existence of a Psycho Mantis or The Sorrow-type figure cropping up in the game. But it gets better.

Remember Metal Gear Solid 3’s minutes-long Codec calls on Japanese cinema and how, yes, Solid Snake can get a bit solid (for lack of a better term) when seeing a poster of a model draped on the inside of a locker? It doesn’t fit – and yet it elevates Metal Gear Solid above the rest because it’s a series not scared to alleviate the melodrama with a spot of silliness. That’s staying too, as Vogt-Roberts explains:

If it wasn’t certain enough already, it’s clear that the Metal Gear Solid movie is in more than capable hands with Jordan Vogt-Roberts at the helm (and Hideo Kojima by his side). Now, the question remains: what bizarre MGS moment do you want in the movie? Let us know down below!