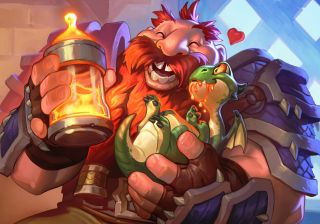 As usual, Blizzard stretched the set reveal over a few weeks, and every new card dump felt like something out of the Custom Hearthstone subreddit. If you showed half of the cards in Descent of Dragons to any Hearthstone player in 2017, they'd have told you they were fan-made and too broken to ever be printed. But that didn't stop Blizzard from pushing obscenely large dragons, disgusting Galakrond heroes, and some of the most powerful neutral cards ever seen.

As you may have deduced, Descent of Dragons focuses on the dragon archetype. Every class received a new Legendary dragon and several dragon support cards, many of which rely on you having a dragon card in hand. There are also two new keywords: Sidequest and Invoke. Paladin, Hunter, Mage, and Druid are the good guys of the expansion and received spells called Sidequests. Once played, these spells hang around until you meet certain requirements - like summoning three Rush minions or using your hero Power three times - at which point they spit out their specified reward. The Paladin Sidequest Sanctuary, for instance, gives you a 3/6 Taunt if you take no damage for a turn, which is pretty darn good for two mana.

Invoke, meanwhile, is tied to the Galakrond heroes given to the other five classes - the bad guys, as it were. When you play an Invoke card, your Galakrond hero gets upgraded and you trigger its hero power. Each time Priest Invokes, for instance, it gets a random Priest card. Invoking Galakrond will improve his Battlecry, making him more impactful the turn you play him. To use Priest again, Galakrond will destroy one, then two, then four enemy minions when played, depending on how many times you've Invoked. Several cards also trigger powerful bonus effects if you've Invoked Galakrond at least twice. For example, the Rogue card Umbral Skulker adds three Coins to your hand if you've Invoked twice.

Keywords aside, the set also casually introduced a new deck type through two Paladin cards which gain powerful Battlecries "if your deck has no neutral cards." Players quickly dubbed this archetype Paladin Paladin - a Paladin deck entirely made from class cards - and I wouldn't be surprised to see other classes receive cards of the same type in the future. We also saw some Inspire cards, a powerful tool for Zephrys decks in the form of Dragonqueen Alexstrasza - which may well be the strongest card ever made - and new tools for classic decks like Pirate Warrior and Handlock. The Descent of Dragons meta is going to be something to see, that's for sure.

More new cards will be released in January as part of a Galakrond-focused solo adventure.