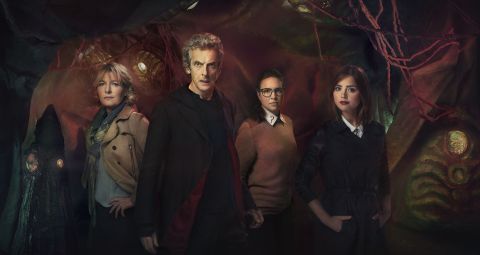 After last week’s alien invasion by numbers, the second half to this year’s Zygon two-parter is refreshingly inventive, an episode that may not be big on action, yet feels like a dramatically satisfying conclusion to last week’s set-up. And how often do we get to say that the second instalment of a two-parter is better than the first?

The inventiveness starts early, with the Doctor’s escape from a seemingly inevitable demise at the hands of Bonnie’s plane-bound rocket. No need to resort to some contrived Sonic Sunglasses shenanigans or convenient interference with the rules of space and time. Instead, Clara’s consciousness is still alive in her evil counterpart Bonnie’s mind (the slightly inverted virtual recreation of her flat, complete with black toothpaste and a backwards clock is wonderfully unsettling) , and Clara’s presence is enough to buy the Doctor and Osgood enough time to grab parachutes and leap out of the doomed aircraft.

The interaction between Clara and Bonnie is actually the highlight of the episode. Jenna Coleman manages to make them feel like subtly distinct characters, and has a blast playing against herself in one (or should that be two?) of her best performances of the series. A foe who’s every bit your equal and can tell when you’re lying is a wonderful dramatic device, and the scenes between the pair exploit that to the max.

Nobody does it better

So, the Doctor’s a Bond fan! The Doctor with a union jack parachute? Genius. And what better reason to wear it than, er, “camouflage”. He is in Britain, after all.

It’s also great that an episode about an alien race trying to bring about a war between two species is prepared to resort to talking as a solution. That the big set-piece – the dramatic denouement – should simply be a bunch of people debating in a room, is a brave move that pays off wonderfully.

The idea of the Osgood Box is every bit as tricksy as you’d expect from a script co-written by Steven Moffat, a wonderful piece of sleight-of-hand by the Doctor that manages to outfox both sides with a pair of boring, empty boxes. Wonder if he’s been watching Deal Or No Deal? The implication that the memory-wiping abilities of the Black Archive have allowed the ”nightmare scenario” to happen 15 times before (and presumably it will happen again) is also a great set-up for future shapeshifting stories.

“The Zygon Inversion” is not perfect.  It loses its momentum in those final Black Archive moments, over-stretching the boxes’ premise to breaking point; and the Doctor is a tad condescending (that side of his character is never the most appealing to watch); and you need to have done a fair bit of revision on 50th anniversary episode “The Day Of The Doctor” to have any chance of understanding what’s going on. But this two-parter has made sure the Zygons remain essential villains in the Who canon. And when the likes of the Cybermen, the Zygons and the Sontarans have had their power to scare neutered by disappointing stories, that’s got to count as a victory.

The Mire helmet from “The Girl Who Died” on display in the Black Archive.

Kate Stewart refers to the Z-67 as “Sullivan’s gas”. Presumably the “naval surgeon” inventor she referred to in “The Zygon Invasion” last week was Fourth Doctor companion Harry Sullivan.

Could Osgood be a future companion? It’s rather sad when she turns down the Doctor’s offer of a trip in the TARDIS, seeing as it's probably the thing she wants most in the world – but the Doctor telling her he’s ”a very big fan” is an incredibly sweet moment. It does seem unlikely that someone who idolises the Doctor so much wouldn’t know what TARDIS stands for, however – she’s not going to get very far thinking it’s “Totally And Radically Driving In Space”.