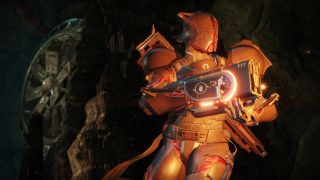 The Jotunn Exotic fusion rifle is one of the premier guns in Destiny 2's Black Armory DLC, and on paper, it's also one of the easiest to get. There's no complicated questline like the Destiny 2 Mysterious Box that leads to Izanagi's Burden. To obtain Jotunn, all you need to do is complete powerful Black Armory Forge bounties at the Bergusia Forge in the EDZ.

You have a chance of receiving the Jotunn in addition to your Black Armory weapon each time you complete a bounty in Bergusia. It has to be a powerful gold bounty, however, meaning you only get two shots at Jotunn per character per week. And again, you have to complete it at the Bergusia Forge regardless of what the bounty actually says. You'll still need to go through all the calibrations elsewhere, but for the final step, head back to Bergusia.

To access the Bergusia Forge, you'll need to unlock the other three Forges first. If you want to try for Jotunn on multiple characters each week, you'll need to clear the Forge questline on all of them. Which sucks, I know. Here's hoping you get Jotunn early. And it is quite a cool weapon. It certainly feels like an Exotic: unlike traditional bolt-firing fusion rifles, Jotunn shoots a single solar orb which feels straight out of Mega Man. It may not be the most efficient gun, but it is one of the flashiest, and it's great fun to use in PvE and PvP. If nothing else, it's worth owning, so be sure to complete your powerful Black Armory Forge bounties at Bergusia until you get it.