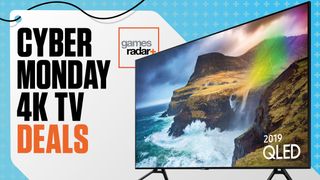 Listen up, there are plenty of great Cyber Week TV deals still hanging about on the web, so if you've been waiting for a chance to grab a new TV without breaking the bank, you still can (but act fast). Despite Cyber Week nearing a close, there are still a bunch of deals to be had, so push aside that tendency to procrastinate and hope on these deals ASAP. We've done all the work for you, searching major retailers like Amazon, Walmart, and Currys to find you the best discounts, deals, and savings for all your TV desires. We've been keeping track of all the best Cyber Week game deals leading up to and beyond Cyber Week - scroll down to find the newest and best Cyber Week TV deals and savings. We keep this page regularly updated, so bookmark it and keep your eyes peeled.

This year is a good one in terms of Cyber Week TV deals - since the next-gen consoles PS5 and Xbox Project Scarlett are arriving next year, so now is the best time to snag a great TV to make the most of the updated graphical capabilities (and ultimately spend less money next year). If you're more of a viewer, we've heard Scorsese's The Irishman looks breathtaking on a brand new Samsung, and you've got Disney Plus and The Mandalorian to enjoy (Baby Yoda looks wayyy better in 4K).

Just remember, these Cyber Week TV deals won't be around for long, especially now that day is drawing to a close. Although savings usually continue a few days after Monday ends, we don't expect most of these discounts to last beyond December 6. So, enough hesitating - scroll below to check out our best Cyber Week TV deals before it's too late.

The best Cyber Week TV deals change every day, and range from top-of-the-range OLED 4K TVs to those, not-quite-as-awesome-but-still-awesome 4K TVs that will make the most out of your 4K capable gaming console. A perfect complement to this Star Wars Jedi: Fallen Order Xbox One X deal currently doing the rounds.

55" Sony Bravia OLED 4K Smart TV | $1,798 on Amazon (save $502)
Get 4K visuals and the fantastically vibrant colors that only an OLED screen can provide with this lovely new smart TV.View Deal

49" Samsung LS03R Series QLED Frame Smart 4K UHD TV | $1197.99 at Newegg (save $500)
This QLED not only has outstanding picture quality, it also transforms into a literal work of art and has a free soundbar!View Deal

40" Sharp LED 1080p Smart HDTV | $169.99 at Best Buy (save $30)
Not everything has to cost hundreds upon hundreds of dollars. This cut-price Sharp TV will be perfect as a secondary set.
View Deal

When did the Cyber Week TV deals officially start?

While Cyber Monday may be over, the best Cyber Week TV deals are still ongoing. And there's never been a better time to be in the market. The trend for Cyber Week TV deals has seen the window of discounts, cuts, and savings widen to the days after Cyber Monday. That means anything from now on is potentially fair game if you’re looking to save money on a new TV.

Indeed, it will be worth checking out the likes of Amazon, Walmart and Best Buy in the lead up to Cyber Monday. While the big (and best) Cyber Week TV deals will undoubtedly come on the day itself on December 2 (as well as the 24 hours before and after), there are still potential bargains to be sought slightly earlier than scheduled. We've even collected the best ones above if you've missed them. Plus, there’s still a post-Cyber Monday splurge to consider.

Will the Cyber Week TV deals just be on TVs?

TVs are all well and good, but sometimes you need something to watch on it. As Amazon Prime Day proved, there are plenty of savings to be made on DVDs and Blu-ray boxets, particularly when it comes to the likes of Marvel and Star Wars. Franchises collections such as Mission: Impossible and Harry Potter will almost certainly take a drop in price on the day, too.

Plus, if you're eager to take your new set for a spin, Ultra HD 4K boxsets and discs will probably plummet to their lowest prices come November 29.

Elsewhere, there's Cyber Week gaming PC deals to keep an eye on, and also Cyber Week gaming headset deals. Don't rule out some bite-sized bargains, either: the Cyber Week Nintendo 2DS XL discounts will be coming thick and fast, and so, too, will Cyber Week iPad savings. Let's hope the cuts are similarly generous for Nintendo Switch Cyber Week bundles and bargains. Basically, everything you could wish for is probably going to be on sale, not just TVs.

Buying a TV means deciphering what all the tech jargon sales people throw at you actually means... Luckily, we're here to help make sure you know exactly what your buying when you get caught up in the Cyber Week TV deals surge.

This is the resolution of the image that can be displayed by your TV. 4K refers to the resolution 3840x2160 pixels. It's also referred to as UHD or Ultra HD by some broadcasters or manufacturers. Basically, if a TV can display pictures in 3840x2160, it can be called a 4K TV or 4K ready TV.

HDR stands for High Dynamic Range. The majority of 4K TVs come with HDR as standard, and it's a technology used to process colours within games, movies, and TV shows. Primarily, HDR is used to boost the colour of a picture by making them more vivid, thereby contrasting colours further. If you can separate very similar shades of colour, then you can create clearer images.

This stands for Organic Light Emitting Diode, and it's a type of TV panel. Basically, while LCD and plasma panels require something called back-lighting or edge-lighting to create pictures on screen, OLED panels don't need it. With back-lit or edge-lit TVs, the LEDs in the panel are illuminated in groups or lines to create a picture. With OLED TVs, each LED on screen can be individually lit – switched on or off to create a picture. This is what allows for truer blacks in OLED sets. With the ability to completely switch off each individual LED, you get sharp edges on images and deep blacks because there is no backlight showing through at all.

This is Samsung's own technology, and it stands for Quantum Dot Light Emitting Diode. Quantum Dots are particles, which are lit to create a picture on screen, and they can get much brighter than LEDs. This means QLED sets offer brighter colours and better contrasts than any other panel type. The panel is still either back-lit or edge-lit like traditional 4K TVs, and this can make a huge difference when it comes to black levels. Back-lit QLEDs can not only deliver the vivid colors, but they can also produce sharp images and blacks that rival premium OLEDs.

This is the speed at which a colour can change on your TV (eg. from black to white to black again). Most 4K TVs have response times quicker than we can perceive them, so it makes no real difference for casual TV watchers or games. However, purists will want a TV with the quickest response time possible.

Not to be confused with response time – refresh rate is the speed at which an image can be refreshed on your TV. Most TVs offer 60Hz-120Hz, although no 4K TV has anything higher. A 60Hz 4K TV, for example, refreshes the image on screen 60 times per second, which allows a certain level of smoothness to the image. If the TV refreshes at 120Hz, the image is twice as smooth, and you notice that in how slick the motion appears on screen.

This stands for High Definition Multimedia Interface, and it's the standard connection cable between a 4K TV and most devices. You need at least an HDMI 1.4 cable to carry a 4K signal, although most modern HDMIs are 2.0 cables, capable of carrying 4K signals at 60 frames per second. And no, you don't need to buy expensive gold-plated HDMI cables to get a better picture - just the Amazon Basics will do just fine.

QLED vs. OLED is the new TV debate on the block. When it comes to Cyber Week TV deals, it's an argument you'll swiftly want to consider, especially depending on what's right for your setup. Check out the definitions for each in our jargon-buster above then head on back here.

Typically, OLED TVs will have superior blacks over QLED, due to QLED being an upgraded LCD unit which still requires backlighting. However, QLED does have a slight advantage when it comes to colour, particularly in brighter rooms.

If you're factoring in price, QLED's smaller models (such as 43-inch against the OLED's smallest 55-inch set), hints that QLED is going to be cheaper in the long run.

Honestly, OLED would be preferable to QLED if you're looking for a bigger set . For one thing, there's far more variety and choice, whereas QLED is limited to Samsung only. If you want to go big on a TV, that's your choice. If you're stuck with a smaller budget, QLED probably gets the edge, and there's going to be very little noticeable difference to the untrained eye.