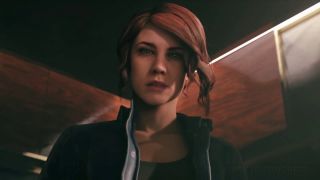 Control developers Remedy recently talked to OPM UK about the potential of the PS5's new features, and shed some light on just what Sony's next-gen console could mean for developers going forward.

In issue 169 of Official PlayStation Magazine, lead programmer Sean Donnelly spoke about Control's "semi-open world," and how the studio hit the limit on what current CPUs are capable of when streaming and loading data between environments.

"When it comes to the PS5, faster hardware is always appreciated and will make life easier in the short term," Donnelly said, "But it's the new SSD that really stands out; essentially streaming will become something that we don't really have to worry so much about and it will free up some extra CPU bandwidth in the process."

When the PS5 specs were revealed, the addition of a solid-state drive, or SSD, was perhaps one of the most significant changes, and moves the next-gen console away from using the mechanical hard-drives found in the PS3 and PS4. The SSD could potentially reduce loading times pretty drastically, and improve the consoles overall performance.

From a developers standpoint, though, Donnelly explains that without the SSD, data streaming "would become a bottleneck" and restrict the content quality of PS5 games. With it, though, the SSD will lift the restrictions imposed by current systems, and will enable developers to craft more detailed worlds. "For something like Control, that could translate to an even deeper destruction system, richer, more detailed worlds, and simple quality-of-life improvements like instant reloading after dying." Technical director Mika Vehkala said that the SSD will also allow Remedy to stream in more data, "allowing us to have much more detail in game worlds than before."

Vehkala also highlighted that harnessing the power of the SSD will also mean that games will require smaller install sizes, as "there is no need to duplicate data to compensate for slow seek times that optical drives and HDDs have."

The quick loading times will certainly be a big selling point for future console owners, but the easy to use hardware will help developers "harness the hardware power quicker", as Remedy's comms director Thomas Puha explains, "PlayStation 5 is about making a really smooth, quick-to-load experience, and a hardware base that's easy to use for us developers, which is great, because it allows us to harness the hardware power quicker."

If you want to read more about Control and the power of the PS5, you can pick up the issue of Official PlayStation Magazine right here.