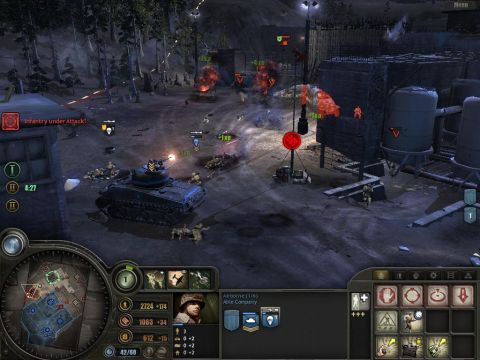 First impressions are formed by technology. Infantry sprint for cover, holding their helmets, ducking behind walls. Artillery sprays dirt and smoke, pin-wheeling men caught in the blast up into the sky. Roofs crackle and splinter, creating holes through which snipers can peer.

Take the battle for Carentan: after a short invasion, Allied paratroopers have pressed the Axis beyond the three bridges that connect the north of the town to the south - a victory that's set to be short-lived. In ten minutes, there will be a full counter-attack, supported by Panzer tanks, for which the player must prepare by mining the bridges, preparing sandbags to hide behind and putting up tank traps.

Above: The flamethrower is an extremely useful weapon - and looks great too

Machine gun platoons are positioned at forward-facing windows, and mortars hide behind buildings to provide indirect fire. When the attack comes, it delivers in both its scale and violence: covered with dust and wreckage, the front lines of what used to be a town are little more than rubble.

A second impression of this melee is that there's detailed opportunity for tactical decision-making. The machine guns and mortar teams so vital for cutting down infantry need to be given a direction and arc of fire: if they're flanked, they're dead.

The same is true of the armour and anti-armour weaponry - a round will bounce off a Tiger's front armour, but put a hole in its side. Better still, a direct hit might kill the gunner in the turret, or damage the tracks.