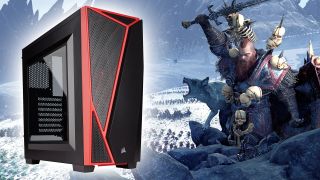 With the best gaming PCs powered by incredible advances in hardware, the sheer number of top PC games that are shedding their console exclusivity, and new technologies like VR and AR providing an ever expanding horizon of experiences, the personal computer has never been more powerful, versatile, and appealing. And while it might cost you a little bit more to get involved than on the console side, the upside is that your games will run faster, look better, and play smoother than anything on PS4, Xbox One, or Switch. For around $1,000, the following build will keep you out ahead of the console curve for years to come. And you'll be able to run Total Warhammer 2...

Note: The cost of parts is accurate as of August 2017. The total of $1000 is based on US prices, although we've included links to the UK equivalents - so your total price / components may vary in different countries.

The case represent the chassis of your PC, the first and most visually important choice you’ll make. Your PC’s case is the face it shows the world, so unless you’re going to stash it in some unseen corner or concealed inside a charming hardwood entertainment center, you want it to look appealing and also be roomy enough to comfortably store all those power-hungry components. And the dimensions and design of a case go a long way to determining how well air will flow through your system, which in turn will determine how far you can push the hardware inside before it hits critical (read: melting) temperatures. I went with the Corsair Carbide because it’s a spacious, sturdy mid tower that also looks like it would fit well in the cybernoir future of the Blade Runner remake. As a bonus, it comes with a side facing I/O panel for easy access, and cable routing to keep all the internal cabling tidy and out of the airflow. It’s sleek, functional, and stylish, and you can get it in black with red, grey, or yellow accents (hint: go with the red).

The power supply is the heart pumping energy to all the vital systems of your machine, and it needs to not only amply feed all the hardware currently filling out your chassis but also have some overhead to accommodate any future upgrades. Luckily, a lot of the components that fill out a modern PC are optimized to not drink a ton of power, and this build specifically isn’t terribly thirsty in that regard. I chose the Rosewill 650 because it provides solid efficiency, a fantastic price point, and plenty of wattage to fuel any future hardware additions.

The motherboard is the skeleton on which all the other parts of the PC are situated. It’s the structural component that defines how your hardware is situated inside the case and coordinates how all that hardware interacts. The model I chose for this build features Intel’s business-class B250 chipset, 12 USB 3.0 ports, and can support up to 64GBs of DDR4 DIMM, plenty for the memory demands of the games of today and tomorrow. While it may lack some of the most advanced features of more expensive boards, for less than $70 it’s a steal, with a robust set of features and some solid future-proofing.

The CPU is the brain that guides and directs your PC, and as such it’s not a place to skimp. But at an incredibly tasty sub-$200 price point, the i5-7500 will provide plenty of bang for your buck and comes with a stock cooler that will keep it frosty even when slightly overclocked. It’s a powerful, capable processor and when paired with an impressive modern GPU it’ll provide enough horsepower to keep all your graphic settings pinned on ultra.

If the power supply is the heart and the CPU the brain, the video card is the muscle of a modern PC, and one of the most important purchases any gaming-minded PC consumer will make. So we’ll splurge a bit here and pick up Nvidia’s impressive 1080, which packs incredible processing power thanks to its incredibly efficient next generation Pascal architecture and eclipses the performance of other cards in the same price bracket (and many that are significantly more expensive). The GTX 1080 also boasts 8GBs of Micron’s G5X video RAM, some of the fastest GDDR on the market. It’s a beast built with 4K and VR in mind, and it handles both admirably.

So the shaky PC-as-human-anatomy analogy falls apart a bit here, but RAM is like the chip we all wish we could insert in our heads that would give us instant access to additional recall and short term memory. RAM bypasses the standard, sluggish loop data flows along from hard drive to CPU and gives your machine a little bank of fast-access memory data can be snatched from much more quickly. We’ll start with 16GB of G.SKILL’s reliable DDR4 offering, but with an upper limit of 64 this build gives us plenty of flexibility to expand later as needed.

Ideally you’d want a fast, spacious solid state drive to ensure speedy load times and quick read speeds, but for this build we’ve focused more on other hardware elements, so I’m going to recommend Hitachi’s affordable Ultrastar 2TB offering here. Those two terabytes offer plenty of storage for even the most robust Steam libraries and its 7200 RPMs mean respectable performance at this tier. That said, if you have the extra bills, don’t hesitate to pull the trigger on a modern SSD.

Optical drives have quickly gone the way of the dinosaur (or, more appropriately, their 3.5 inch and 5.25 inch floppy disc predecessors), and good riddance. While you can find them for a bargain, for this build we’re going to forgo one entirely. Welcome to the digital future.

If you’re the sort who thrills to the freedom from corporate shackles afforded you by UNIX based operating systems, more power to you, but for the rest of us, Windows 10 can still be gotten for free through Microsoft’s assistive technologies page. It’s intended for users of accessibility features like magnifier or on-screen keyboard, but there’s no system in place to ensure that you’re one of those users. It does require a copy of Windows 7.1 or 8, though, so if you don’t have access to those older OSes a fresh copy of Windows 10 will run you in the neighborhood of $50-$100.

There you have it, a very powerful, versatile machine with plenty of allowances for future upgrades. The grand total? A mere $1,106, a pretty incredible bargain for all those horses under the hood. But if you’re starting with absolutely nothing in hand and need some hot tips on supporting hardware and affordable peripherals, read on.

Peripherals come largely down to personal taste. If this is your first time building a PC, I recommend you go with the simple, sturdy, functional AmazonBasics line I’ve linked above. They’re responsive and with a reasonable build quality, and if you’re the sort of PC gamer who ends up playing the majority of games on a gamepad anyway, they’re an excellent, cheap solution for all your non-gaming computing. Of course, if you’re a power user who relies heavily on custom inputs (or the precision of mouse targeting in competitive FPS), you likely already have preferences for gaming mice and keyboards that suit your needs and setup. Personally, I use a Corsair X70 with Cherry MX Blue switches because I like the tactile clicking while I’m typing and rarely use my keyboard for gaming, but my mouse is an ancient, well worn generic 3-button Dell that’s been with me more years that I’m comfortable admitting. The key with peripherals, especially input devices, is finding what works for you (and what you can afford).

If you’re like me and your PC anchors your media setup, you’ll want a decent sound system to watch movies with others or pump out sound in the background while you putter around the house. The Logitech Z313 is a great, very affordable solution with a deep, bassy subwoofer and a handy control pod you can mount on top of your case or keep near at hand to adjust volume on the fly. If on the other hand you’re mostly interested in immersive, personal sound, the G430 Headphones provide incredible sound quality, a folding, noise-cancelling boom mic, and Dolby 7.1 surround sound support for those times hearing a sniper chambering a round behind you is the difference between life and respawning. They’re a steal at less than $40 and lightweight enough to perch on your dome for extended sessions without straining your neck.

If you’re not planning on piping your PC directly into a fancy new 4K TV panel, you’ll need to pick up a monitor that’s an adequate match for the roaring graphical powerhouse you’re about to unleash. Because the powerful 1080 is the star of this build, you’ll want a monitor that incorporates Nvidia’s proprietary frame syncing technology, G-Sync. G-Sync matches the frames being displayed on screen to a monitor’s native refresh rate, meaning no more screen tearing and lag associated with a locked frame rate. It creates much more fluid, smooth images and once you’ve experienced proper frame syncing, it’s hard to go back. I chose Dell’s 24’ inch masterpiece because it not only features G-Sync compatibility but also a blistering 165-Hz refresh rate. It also supports resolutions up to 2560 x 1440 which, while not quite 4K, still provides incredible sharpness and detail on a rich, versatile display. If you’ve got the extra dosh, you won’t find a better monitor for less than $400.

Want more choice? Here's our guide to the Best TVs For Gaming.

Alan Bradley
Alan's one of the hardware guys at GamesRadar, and has been writing about games for over a decade. He loves gadgets and new technology, speedy race cars, and the glitter of C-beams in the dark near the Tannhäuser Gate. Find him @chapelzero on Twitter for lengthy conversation about CRPGs of the early 90s and to debate the merits of the serial comma.
See comments
Gaming deals, prizes and latest news