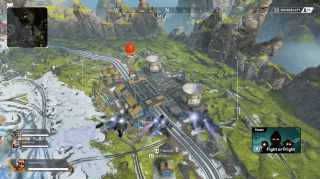 Working the best places to drop on Apex Legends Worlds Edge map will have you feeling a lot like Katy Perry. First you’re hot, then you’re cold and then before you can even remember what the next lyric is, you’re surrounded by two enemy teams with zero shields and med-kits. In all seriousness, one of the main complaints about Apex Legends when it was first released was that there was only one map and that got boring quick.

With Season 3, and the old Kings Canyon map out of commission because of Crypto blowing a major tower up, the Legends you know and love are dropped off into a new map called Worlds Edge. It has icy landscapes, lava-infested territories, wild fauna and even an abandoned city. It’s also incredibly wide and more open, meaning that it’s far easier to get ambushed by two teams at once than it was in Kings Canyon.

Thankfully with this guide, we’ll be able to show you just which parts of Worlds Edge you should be landing at and why.

Found at the very bottom of the map, the Dome is where you can get high-tier loot. That is, if you don’t mind exploring a landscape that’s full of lava and is a prime spot for enemy teams to jump down to as well. It’s got buildings that are connected to one another with narrow corridors, which can be useful depending on which Legends you use. Just don’t fall into the lava, it can damage you and if an enemy team is already there...Well, they don’t need anymore help, do they?

Keep going North from The Dome and you’ll come across Lava City. Lava City is smaller than Capitol City, and still has fissures of cooled lava that, thankfully, won’t damage you, but it has similar buildings that contain high-tier loot. Because of how small the area is, it’s a location that can get busy if more than a few enemy squads land there, and because of that, loot can be picked up quickly. If you need to land there last minute, do so only if you’re confident you can handle the odds.

If you follow the train tracks West from Lava City you and your team will find themselves stumbling into the Sorting Factory. The Sorting Factory area is shaped like an oval and also has high-tier loot hidden in supply bins scattered around the area outside of buildings. It’s a very enclosed space, with most loot found inside buildings bottom floors, or at the very top where they can be found in some very tight nooks and crannies. If you want some cover at the very start of the map, this location is the one for you.

The Geyser, located just North-East of the Sorting Factory, is one of the greenest places in all of Worlds Edge. It’s also got little to no cover outside of the connected buildings that runs in a circular pattern throughout the area.These buildings have a variety of different items that can range from mid-tier to high-tier. The cave entrance leads players further North towards Capitol City and the Overlook, perfect for a speedy exit if necessary. One of the main selling points about The Geyser is, of course, the huge geyser that can be used as a Jump Tower. If you plan to go here, you should be aware of the open space, but also of the easy exits that are situated in the area.

Head North from The Sorting Factory and you’ll be in the Fuel Depot area. Here is one of the best places to drop during the early game, as while it only offers mid-tier items, it’s a large area with plenty of supply bins and hiding areas. It’s also far from the tracks of the train, which some enemy teams often stay on to see if they can spot enemies while on the move. While no area of Worlds Edge is rightly ‘safe’, this area is more secure than others.

As you may have suspected, The Tree area contains a massive, mushroom-like tree and can be found West of Lava City, The Dome and The Sorting Factory. The main aspect is, of course, the Tree but below it and scattered around the area are a number of supply bins. There are also buildings, that are usually connected by narrow corridors which can also contain a number of high-tier items. It’s a popular place to land, but if you think you can handle the waves of enemies, we recommend going there for some great items to carry you swiftly to late game.

You’re probably thinking to yourself, huh, there’s a lot of lava on this map already. Well, it’s only going to get hotter if you head on down to the Thermal Station. Like The Dome, it’s at the bottom of the map, but to the West. Right at the centre of this area lies the Thermal Station, a huge, circular structure with a tower that only certain characters like Pathfinder can get to. There’s also a village nearby, as well as a small cluster of houses and supply bins. This is a high-tier area with a ton of items, making it a popular destination to drop off at.

One of our favourite places in Worlds Edge is The Trainyard, just North from the Thermal Station. Not only does it usually have very high-tier loot, but it’s a jungle gym in disguise. What we mean is that it’s incredibly easy to hide here, which can work in both your favour and against you, depending on which Legend you decide to play anyway. There are a number of train carts that are hanging above, and dropping  (or using a zipline) into one of those can guarantee both height advantage against your enemies, as well as pretty good loot. If you can’t manage that, dropping into one of the warehouses is also a sound idea as it can give you cover while trying to zigzag around enemy teams.

The Drill Site is North East from the Train Yard and is surrounded by cliffs to the east of it. It’s a very defensible area, with plenty of ziplines for high-speed Legends. However, it doesn’t boast a great deal of high-tier items and we suggest only going to the Drill Site if you want to start your game off slow rather than in an intense battle with several other enemy teams.

Just North of the Drill Site is Skyhook. Skyhook is a city in its own right, as there are more than a fair few tall buildings that are laid out in this area. One of the best Skyhook buildings has two ziplines running at each side, making it a nightmare to defend at times, but a particularly popular place to raid due to this weakness. Skyhook’s buildings also contain a fair bit of loot, with supply bins up on top of roofs and just outside. The items you’ll find here are almost always rare or epic, meaning that if you land here, be prepared for the fight of your life. Competition is hot over at Skyhook.

That’s right, more lava! The Lava Fissure is located directly west of The Drill Site and is best described as a series of platforms that hang above a boiling lake of lava. These platforms do have a selection of supply bins, ziplines and small buildings, all with pretty high-tier loot. However, there aren’t many hiding places here and to land here straight away may be a tad too risky for less experienced or confident teams.

If there’s one place where we’re certain you’re going to be ambushed at, it’s Capitol City. With huge, tall buildings and small, crowded corridors and alleys, Capitol City could be the host of more than five different squads due to just how many buildings there are. The loot isn’t even all that rewarding either, so we would advise going to Capitol City only if you have no other choice or if the Ring unfortunately forces you there.

The Epicenter is easy to spot, as it’s covered in snow and ice. The tower there also has some high-tier loot in the middle which can be accessed by certain characters like Pathfinder, or players who drop there. Supply bins also surround the tower, as well as further outside of the center. It’s a popular dropping location, probably due to how much of an eyesore the Epicenter actually is, but with that much high-tier loot, it’s definitely a location worth going to all the same.

Overlook is a fairly underrated part of Worlds Edge, making it a pretty safe place to land depending on where the airship first starts. As the name suggests, it does overlook the ocean and has both upper and lower platforms consisting of both supply bins and rooms filled with high-tier items. If you explore outside of those platforms, you’ll also find a few buildings that aren’t too far from the Epicenter and Capitol City. Overall, Overlook is one of the best places to land thanks to its rare loot, and range of infrastructure that can give you a great hiding place when you’re in a pinch.

Just North of the Epicenter is the Refinery, one of the most well-known, reliable and consistent places in the Worlds Edge map to get rare and epic items. If you land inside the refinery itself, you get jostled left and right in a circular motion, almost as if you’re going down a slide, which can be used by Pathfinders in particular to keep the enemy team guessing your location. If you’re going to land here, be on your guard.