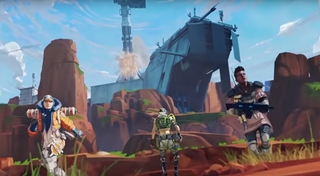 While neither of the trailers give us a complete look at the new Apex Legends map, there are a number of alterations shown. The whole concept behind Season 2 is that Apex Legends Wattson is being introduced, but there's also Apex Legends Crypto; another new character that hasn't been officially revealed yet.

In the first cinematic trailer, we see Crypto using his laptop to send out an EMP (electro-magnetic pulse) that topples the tower at Repulsor, and causes the leviathans (huge monsters lurking in the water) to invade, with plenty of flyers alongside them.

At the start of the second trailer in the video, we can see Wattson and Wraith duking it out while the leviathans are stood tall in the background. It looks like they're going to be a mainstay for the map during Season 2, perhaps only moving periodically and players have to avoid being trampled?

Meanwhile, one of the bridges at... Bridges has been destroyed, new base camps have been established throughout King's Canyon, and the shattered forest area has turned luscious and green. There's also caged flyers dotted about, though it's unconfirmed whether they can be set free in a match.

It seems like the Apex Legends narrative is fully underway now, though Crypto may not be introduced to the game right at the start since he hasn't even been revealed yet. Crypto's laptop has been found on the map which confirms his existence at the very least... I can't wait to EMP some unsuspecting fools with his abilities.