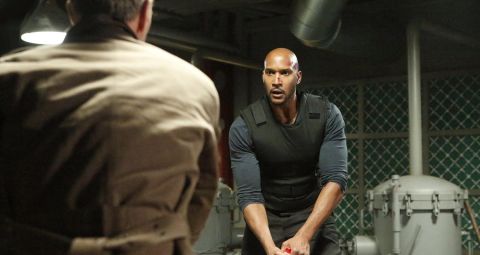 Yep, that was all kinds of fun. Action-packed, emotional, shocking and surprising, it pretty much ticked all the boxes on what makes a great season finale. Being a Whedon show it also played on expectations too, momentarily leading us to believe Fitz had copped it before leaving us with an almighty cliffhanging involving Simmons instead. Basically, if you’ve had any love for Agents Of SHIELD at all this season, it was a hell of a pay-off.

There were a few creaky moments: the whole rescue-Bobbi b-plot felt a little underwhelming with Agent 33’s death particularly wasted in a blink-and-you’ll miss it farcical misunderstanding. There were also some horrendously contrived speeches from Jiaying, whose transformation into an überbitch ready to bump off her own daughter sacrificed a certain degree of character development on the altar of melodrama. Oh, and Coulson delivered his quips with his ability to make deadpan sound more like on-life-support-pan.

Otherwise, though this was rollickingly great small screen sci-fi with some lovely subtle touches. Because between all the great fireworks – and there were some exceptional fight scenes to savour – Cal’s redemption and vindication was a satisfying conclusion to his character arc. His decision to kill Jiaying so that Daisy didn’t have to gave the ending an emotional resonance that never felt gratuitous (“You don’t have to live with the pain – I will”); it was completely in character and a great moment of uplifting TV cheese. Because cheesiness can be good, handled in the right way.

The file Coulson hands Skye when he says SHIELD needs to set up a new secret team of super powered agents is marked “Caterpillars”. This is mirroring almost exactly what happened in the Marvel comics universe in 2009 when Nick Fury created and personally oversaw three new “secret” super teams in a title called Secret Warriors. Daisy Johnson (aka Quake) was indeed a member and leader of one of the groups, and the project was codenamed Caterpillars.

Elsewhere there were wonderful little character beats for Mack, Fitz, Simmons and Lincoln. Yes, we said Mack. Finally he proved his worth in this show; his grim determination in battling Gordon matched by his terrible nicknames for everyone and his self-effacing humour. Though it looks like the Fitz/Simmons romance is back on (possibly death pending) it was great to have a brief return of the Fitz/Mack bromance (see Best Line below).

You also have to love the moment when Mack decks Lincoln – even though it looks as if he’s about to come to the light side of the Force – just to save some time. Classic. It looks like there is hope for Mack yet. As for Lincoln, surely he’s being lined up to be one of Agents Of SHIELD’s new “Secret Warriors”?

Great FX on show too, from the superbly choreographed fight between Syke and Xerox/Multiple Woman/Ginger Ninja to Skye blasting the jet off the ship. This was a genuinely eye-popping episode with some impressive production values.

The epilogue scenes were all great fun, especially May sneakily taking her gun on holiday and the chilling tease about next season’s arc; wonder if sales on Omega 3 fish oil pills are gong to rocket? Skye’s visit to her dad was sweet too.

An immensely satisfying conclusion to a season that began patchily before finishing in style.

Mack: “What are those things?” Fitz: “Quantum field disruptors. Should contain him in here if he comes back.” Mack: “Yeah, of course. Why didn’t I think of that?” Fitz: “That’s okay. You’ve been busy and you’re not a quantum physicist. It’s completely understandable.”

May’s locker is numbered 33. The little label saying “May” is clearly new (well, newer than Bobbi’s label) so has May recently decided to take over locker number 33 as an ironic joke after Agent 33 pretended to be her for much of the season? Another label says Simon-Gersuk: Jake Simon-Gersuk is a set production assistant on Agents Of SHIELD.

So the car that Coulson uses to trap Cal can withstand a blow from a battering ram without a dent? It must be made out of vibranium.

All the fighting scenes were great but the moment that really takes us by surprise was Coulson losing his arm. Later in the episode he tells Andrew that he’s considering options – what’s the betting one of those options involves a bionic arm designed by Tony Stark?

Skye beats Cal to the punch, guessing that he’s going to say “Best day ever!” But Cal has the last word saying there was only ever one best day: the day his daughter was born.

As soon as Simmons hinted that she might actually have feelings for Fitz, you just knew one of them was doomed. The script teased that it was going to be Fitz, but amazingly both of them were still alive by 10 seconds from the end of the episode. Then Simmons was swallowed by the monolith. Admittedly, she’s probably only trapped, not dead, but something had to happen to one or other of them.

We did wonder, though, if Simmons was actually going to reveal she’d developed a crush on Cal. “His physical changes have improved,” she tells Coulson. “Careful. I’m a married man,” smirks Cal. Cue Simmons blushing like some character in a Jane Austen novel.

Hang on? Have we been missing a running joke all season or has Mack only just turned into Cisco Ramone? He’s called Fitz Turbo regularly, but here he’s handing out nicknames all over the place: he calls Skye Tremors (there’s already a character called Tremor in the DC universe); he calls Multiple Woman the Ginger Ninja (we still prefer Xerox); and he calls Gordon No Eyes. Cisco has a better hit rate.

Jiaying and Lincoln once suggested to Skye that the “gloves” SHIELD had given her to control her powers were a sign of SHIELD’s oppression. At least the SHIELD gloves were intended to help her heal even if they did restrict her powers. Now Jiaying is forcing Skye to wear a very similar pair of “gloves” that are only designed to douse her powers. That’s dramatic irony, that is.

Just before Gordon gets himself killed the make-up team finally perfect his no-eyes make-up. For once the skin tone matched perfectly and the sockets didn’t bulge.

Here are those plans for next season’s replacement bus the right way up for your perusing ease.

This is probably a coincidence and not an intentional in-joke, but Cal’s new identity is a vet called Winslow, while in Marvel’s Howard The Duck comic there was a character called Arthur Winslow, a would-be author who dreamed of living the life of a hero who eventually became Turnip Man. Hands up who’d like Turnip Man for season three?

Marvel’s Agents Of SHIELD airs on Friday nights on Channel 4 in the UK.